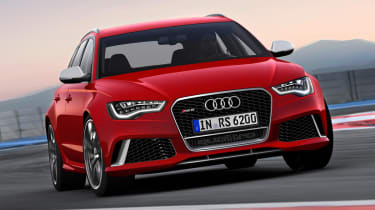 The new RS6 has been revealed, and for the first time in Audi history the new RS model is actually less powerful than the old. With a new version of the twin-turbo 4.0-litre TFSI 552bhp engine – as used in the current S6 – Audi claims that the RS6 will do 0-62mph in 3.9secs, and go on to a limited 189mph when fitted with the ‘dynamic plus’ package.

With the aim of reducing CO2 emissions without sacrificing performance, weight has been reduced by over 100kg from the previous RS6, mainly thanks to the use of more aluminium under the skin and a more compact engine. Coupled to this is added efficiency from that new engine, which thanks to cylinder deactivation, stop-start and eight-speed ZF gearbox is roughly 40 per cent more fuel-efficient than the old model, capable of a claimed combined fuel consumption of 28.8mpg and COS emissions of 229g/km.

There are two options for suspension, with the standard adaptive air suspension – lower than the standard car by 20mm – and the more conventional steel sprung ‘sport suspension plus’ with Audi’s three-way adjustable Dynamic Ride Control system. The RS6 also gets Audi’s latest ‘wavy’ brake discs for extra weight saving, with beefy six-piston callipers. Carbon ceramic discs will be available as an option.

20-inch forged alloy wheels come as standard, although 21-inch versions can be ordered. Visually, the RS6 gets a very similar treatment to the smaller RS4, which includes new bumpers, black grille, wider arches, roof spoiler and diffuser, as well as the large oval tail pipes.

In standard form, the RS6 Avant is limited to 155mph, which can be raised to 174mph with the optional ‘dynamic’ package. For the full 189mph, you’ll have to shell out for the ‘dynamic plus’ package. Audi hasn’t released any pricing info on the RS6 Avant yet, but it is expected to start from around £77,000 with UK sales beginning in July 2013.