Last month I mentioned that while our 645 is great to own, it suffers from not doing anything outstandingly. Put another way, it lacks star quality. But this month I've discovered there is something you get with a 645 that is truly outstanding - brilliant customer care at service time. 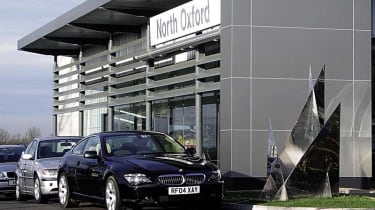 Last month I mentioned that while our 645 is great to own, it suffers from not doing anything outstandingly. Put another way, it lacks star quality. But this month I've discovered there is something you get with a 645 that is truly outstanding - brilliant customer care at service time.

Last month the dash display popped up the message that the Gadgetron required its first service, with 15,900 miles showing on the clock. Instead of calling our local dealer I put a surprise call into North Oxford BMW, as I've driven past them almost every day on the way to work and never called in. The service advisor reckoned the oil service and fitting a new boot- light would only take a couple of hours - he suggested bringing the car in for 8am and enjoying breakfast in the canteen while they completed the service.

I trucked up on the day in question, handed the keys over and was pointed in the direction of the breakfast bar, where a cheerful chap made me an excellent frothy cappuccino and asked what paper I'd like. There were plenty of croissants, Danish pastries and other savouries to pig out on and, if a guilt complex starts to kick in, you can go to the work area, plug in the laptop and pretend to be working. I didn't bother with any of that nonsense, preferring to wander over to another part of the huge showroom and take the opportunity to update my knowledge of BMW's latest motorbikes.

Things were going swimmingly until, just before the two hours were up, the service manager called me over and said that, although the service was complete, they were unable to reset the service indicator. There was a computer fault - which seems symptomatic of the problems I've been having with the i-Drive generally - and the only option was to reboot the car's computers with the latest software. As this could take seven hours, they'd need the car back another time.

A few days later I went back and a brand new 5-series courtesy car was waiting for me to take away. They apologised for the fact it was 'only' a 5-series (I neglected to tell them that when I took the Range Rover in for a service the other day I was given a diesel Astra). There then followed a pantomime of missed messages and massive traffic problems in Oxford that meant I didn't return the courtesy car for another five days. 'No problem, sir,' came the reply when I finally went to collect the Gadgetron. 'You'll notice a few extra services on i-Drive now it's been rebooted.'

The bill was £120.78 - the two cappuccinos, nine pastries and pack of biscuits came free, as did the highly professional way it was all handled. In my experience, no other car company comes even close to matching BMW customer care, let alone surpassing it. It's no surprise that BMW customers become so loyal to the brand.