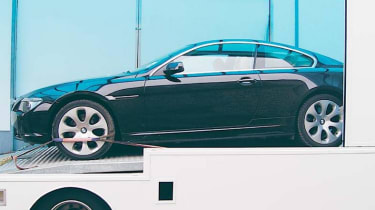 BMW's sharp new coupe seemed to be the perfect answer to our quest to find a sports car that was both exciting to drive yet capable of doing the occasional school run. With its coupe good looks, chunky V8 and, crucially, its 2+2 interior, this was the perfect weapon to do battle with all the yummy mummies with their big 4x4s. All we had to do was spec our car. Now, even a standard 645 comes packed to the gunnels with technology (including the infamous i-Drive) but we managed to add even more goodies from BMW's enormous options list, including the Dynamic Drive pack (bigger wheels, active steering and active anti-roll bars), sports seats, swivelling headlights and 'professional' satnav. One thing we definitely got right was the colour, black metallic with cream leather, as our 645 never looked anything other than sensational. I reckon the 6-series is Chris Bangle's best take on how a modern BMW should look, being bang up to date, effortlessly handsome in most people's eyes, with none of the retro styling clichés seen on so many cars today. Initial impressions were extremely favourable. The 645 was effortlessly fast thanks to its stunning, super-smooth, 4.6-litre Valvetronic engine, which punches out an easy 328bhp and made the 645 a cracking car to live with day to day. Other highlights included the great sports seats up front, which not only offered fine support in corners, but folded forward quickly to give easy access to the rear. Despite the runflat tyres (which seemingly last for ever; the originals were still on the car when it went back at 28,000 miles!) the ride was passable too, although I think the active roll technology helped a lot here, decoupling the anti-roll bars when they weren't needed and allowing the wheels to move more freely over our rutted roads. It wasn't all good, though. The active steering felt odd from the start, especially at low speeds when it was both heavy and completely artificial in feel. It improved slightly at speed, above say 40mph, when it started to feel less heavy but still a bit thin on information for a car with a supposedly sporting bent like the 645. We'd specified a manual 'box, which generally seemed like a good idea, offering peachy changes once under way, though it would occasionally deliver an embarrassingly lurchy getaway that was amateur enough to make even a driving instructor wince. I never fully understood why this happened, but reckoned it could have had something to do with an over-long clutch pedal action. It wasn't long before the 645 got the chance to prove its GT credentials when we took it to Tuscany for the family holiday. It was in its element as we cruised through the European motorway system; piling well into three-figure speeds seemed absurdly easy (it was as if its elegant body had been coated in Teflon) and it eventually topped out in Germany at well past the last 160mph marker on the speedo (we 'figured' it just before it went back and hit 60mph in 5.8sec and 100 in 14, which is rapid in anyone's book). Yet, despite the big speeds and heavy load, the car still managed to average over 24mpg during the 3000-mile journey. There were a few grumbles from the occupants in the back, though; the rear seats might look great but over long journeys their bolt-upright backrests increasingly became a pain, quite literally, making them more suited to short journeys at home than pan-European tours. The i-Drive wasn't winning many friends either. While there wasn't a corner of Europe the satnav didn't know about, it had the annoying habit of triggering a system crash if you turned the car off before reaching your destination (while filling up with fuel, for example). Our car received an i-Drive update at the one and only service required in 12 months (at 15,900 miles, and cheap at £120.78) but even then it seemed fundamentally flawed to me because it always reverted to the main menu screen if you had to turn the car off. It would have been far more useful had it returned to the screen you'd selected. i-Drive can be a very distracting device, too, taking a maddening ten screen-led nudges on the controller to get from 'satnav with radio' to 'satnav with CD'; way too distracting to be safe. Best not mention the infuriating indicators, with their stubby, overly clever stalk that always remained in the central position, meaning you had to keep checking the dash to see if they were on or not. That didn't seem like progress to me. In fact, this became a recurring theme with our 645. It seemed that when BMW's undoubtedly brilliant engineers designed the car they became obsessed with re-inventing things that worked perfectly well in the first place. Before the 645 arrived I never knew how much I liked conventional steering and suspension, or a stalk that clicks into position when you put the indicators on, or a row of buttons and knobs to control the radio. These things have all been honed over time and didn't really need meddling with in the first place. Were we to order a 645 again, or any 6-series for that matter, we'd take it without the Dynamic Drive options, exactly as the M division did when it developed the M6; it simply doesn't need them. All the dynamic package does is muddy any messages coming through the chassis, making it a disappointingly anodyne car to thrash. I desperately wanted to love the 645 but after 12 months I ended up admiring it for its looks and engine but never loving it as a whole. With the 6-series, BMW has created a terrific-looking car with plenty of practical touches backed up by fantastic build quality and one of the best dealer networks in the business. The trouble is that, despite that monster engine and the promise of the ads, it turns out the 645 isn't the drivers' car BMW or I wanted it to be, and that's a real shame.