The ultimate drifting machine! BMW shows what’s possible with a few chassis tricks on the 7-Series 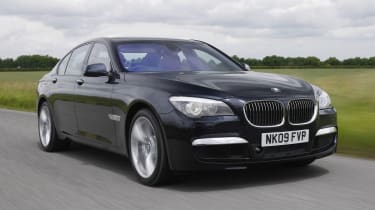 We want to deliver the ultimate drifting machine.’ I can’t have heard that right, but Jos van As, BMW’s driving dynamics director, expands on his theme: ‘If you disable the DSC we have a special setting that sharpens the steering, makes the rear suspension softer and tightens the EDSL [electric differential]. We designed it for Scandinavian buyers.’ You learn something new…

We’re chatting as we drive a route through the Scottish Highlands in BMW’s new 740d. But the car is only part of the reason we’re here – Jos and his team also want to demonstrate the abilities of the electronically controlled suspension fitted to increasing numbers of BMWs. Basically this is the German firm reassuring us that its cars are still set up by man rather than machine.

Jos’s department, the catchily titled Functional Integration Driving Dynamics division, contains 90 people split 50:40 between computer geniuses and mechanical engineers – or as Jos puts it, ‘brains and arses’. The idea is the arses tell the brains what to do.

And what can be done is seemingly limitless. The interiors of two accompanying 730d’s have been butchered and laptops plugged in. A few swift key-strokes then allow the cars to handle like puddings or trolley jacks. All good fun, and actually quite instructive as we toy with various settings – including the one that makes a 730d behave like the new 5-series GT (they share the same platform and wheelbase). Think a fraction sportier, a little sharper on turn-in.

And the 740d? It hasn’t got a 4-litre powerplant as the name might suggest, but the latest incarnation of BMW’s twin-turbo 3-litre diesel, an engine we like very much indeed. Especially since it now produces 301bhp, and 443lb ft at 1500rpm. 540d? Sometime next year. 340d? Now that could be the ultimate drifting machine.