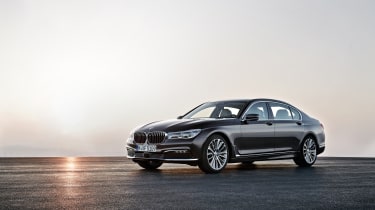 BMW has released details of its 2015 7 Series, confirming it will feature next-generation engines, a lighter body and a raft of new driver assist technology. The new flagship model boasts an evolved exterior design and an updated interior, and is set to arrive in the UK this November.

At launch, the new 7 Series will be available with two six-cylinder engines mated to an updated version of BMW’s eight-speed Steptronic transmission. The automatic gearbox features leggier final drive ratios and an efficiency boosting satnav shift strategy, which can make informed decisions to select the most appropriate gear for the road ahead.

The first (and likely best selling) engine at launch will be the 730d. The turbocharged 3-litre diesel produces 261bhp and 457lb ft of torque, and is claimed to accelerate the new car from 0-62mph in 5.8sec and on to a limited 155mph top speed. It's also good for a claimed 62.8mpg and produces 119g/km of CO2. 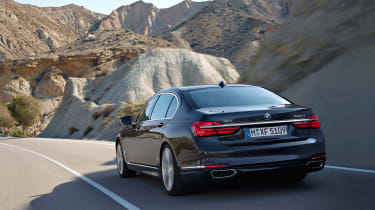 Buyers can alternatively opt for a 3-litre petrol engine, in the form of the 740Li. The more potent unit produces 321bhp and 332lb ft of torque, enabling a claimed 5.5sec 0-62mph time. Combined fuel consumption is a claimed 42.8mpg, while CO2 output is rated at 154g/km. It too is limited to a 155mph top speed.

A new arrival for 2016 will be the 740e hybrid. Borrowing technology from the i8 and i3, BMW has managed to extract a total of 321bhp from the 740e’s 2-litre four-cylinder petrol engine and electric motor powertrain, enabling it to mix a 134.5mpg combined figure with a 5.6sec 0-62mph time and 149mph top speed. Thanks to its ability to drive in an all-electric mode for up to 25 miles, the 740e’s CO2 emissions are also claimed to be as low as 49g/km, matching BMW’s far lighter i8 sports car. 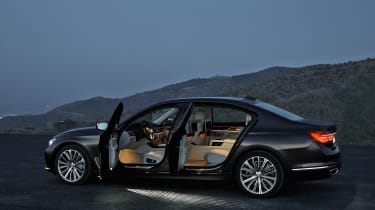 For the first time, BMW has used carbonfibre-reinforced plastic (CFRP) in the 7 Series’ body shell, helping to increase its structural rigidity and boost safety. At the car’s centre is a CFRP core, while steel and aluminium are also used extensively in surrounding components. The result shaves as much as 130kg off the 7 Series’ weight, meaning the new 730d could weigh less than 1800kg (compared to its predecessor’s 1915kg).

The new 7 Series features a heavily revised suspension setup, comprised of air springs front and rear. This system not only provides variable damping, but can also be adjusted to raise ride height by 20mm to 155mm under 22mph, or lower it in Sport mode by 10mm. BMW promises the updated air setup, as well as its optional Executive Pro Drive system (which adds active roll stabilisation), will improve both ride quality and handling. 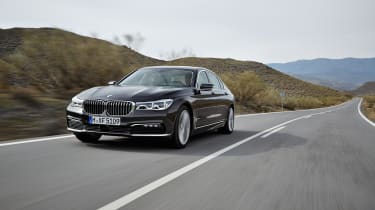 Optional fitment of an optional four-wheel steer system, available on both four- and rear-wheel drive models, helps to increase agility, while optional self-parking premieres the world’s first full self-parking system. Though we’ve seen auto-parking systems many times before, this is the first production car that doesn't require a driver behind the wheel. Remote Control Parking can park the car at the press of a button (on the key fob), meaning the driver can hop out of the car before it’s even in a space.

Other key tech features are gesture control and touchscreen commands for fifth-gen iDrive, a head-up display, laser lighting and accident assist features such as lane control assist and collision warnings.