BMW's fifth generation 7 Series will be the most advanced yet 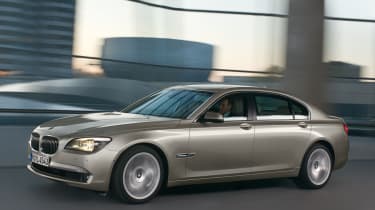 BMW is releasing a significantly overhauled 7-Series in November. It'll initially be launched with three engines, two petrol and one diesel, all of which will be more powerful and more efficient than the engines in the current 7-Series range.

Technolgy used in the newcomer will include a night vision system, a lane departure warning, and both forward and side facing cameras are options. Of particular note are the rear wheels, which can turn by up to 3º in order to “offer enhanced composure and driving dynamics” as well as aiding manoeuvrability at low speeds.

Other changes include an 8GB hard drive built into the iDrive system so that music can be stored in the car, four-zone climate control as standard and, thankfully, a slight styling overhaul on the bland-ish current model.