BMW has shown a lighter and faster version of the M3 saloon, powered by the M3 GTS engine - but it won't be coming to the UK 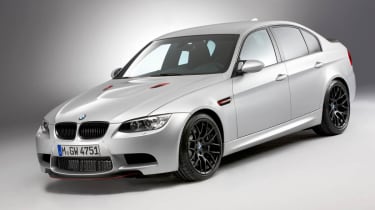 BMW has unveiled a new version of the M3 saloon, set to be the most expensive four-door M-car ever when it goes on sale later this year - but British buyers won’t have the chance to buy it.

The M3 CRT – which stands for Carbon Racing Technology – uses lightweight panels made from carbonfibre reinforced plastic. BMW claims that a CFRP bonnet and lightweight front seats have reduced the kerbweight to 1580kg, around 45kg less than the standard M3 four-door M3, and a saving of around 70kg compared to a standard car with the same specification. Weight distribution is now 52: 48 front-to-rear.

Power comes from the same engine as the hardcore M3 GTS, with the 4.4-litre V8 turned up to deliver 443bhp and 324 lb ft of torque. With a power-to-weight ratio of 272bhp/ tonne, and standard-fit twin-clutch transmission - that’s good enough to blast the CRT from 0-62mph in a claimed 4.4 seconds, 0.5 seconds quicker than the standard M3 saloon.

The bad news for British buyers is that BMW GB isn’t going to be bringing the car here, reckoning the M3 saloon’s minority appeal means there won’t be sufficient demand for a right hand drive version. Just 67 M3 CRTs will be made, and although pricing hasn’t been announced you can bet its extreme exclusivity will come with a substantial price supplement over the standard car.