BMW’s M5 not enough for you? German tuner Manhart might have the answer 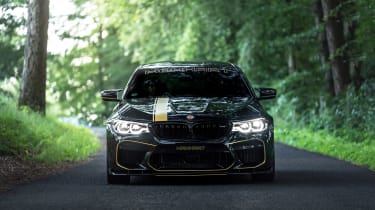 German BMW tuner and serial engine-swapper Manhart has released details of a 712bhp version of the already potent BMW M5. Called the MH5 700, its modifications comprise both hardware and software changes, alongside a set of aesthetic upgrades that create an altogether more aggressive package.

Starting under the bonnet, the engine itself is the familiar twin-turbocharged 4.4-litre V8 unit, but in this instance Manhart replaces the standard M5’s ECU with its own, dubbed MHtronik. This lifts the M5’s power from 592bhp up to that headline-grabbing 712bhp figure. Torque also swells from 553lb ft to 642lb ft. Manhart hasn’t revealed many performance figures, only stating that the MH5 will go from 62mph to 124mph in just 5.9 seconds.

> Click here for our full review of the BMW M5

Also fitted is a new stainless steel exhaust system, simultaneously reducing back pressure and addressing the somewhat demure sound of the standard M5.

To further sharpen the M5’s dynamic make-up, Manhart fits KW coilovers, reducing the ride height by 20mm. Keen not to reduce the M5’s vast spread of capabilities, Manhart hasn’t just pumped up the spring rates and hoped for the best – there are also new dampers designed to match the springs and help handle the new 21-inch wheels (an inch bigger than standard).

Aesthetic changes are limited to some gold decals, a carbonfibre splitter, a rear diffuser insert and a lip spoiler. This is uncharacteristically subtle for Manhart, but further ‘aerodynamic enhancements’ are in development, including a redesigned carbonfibre bonnet, usually the defining styling element on Manhart BMWs. The changes inside are equally subtle, amounting to little more than colour and trim updates.

The standard F90 M5 is already an immensely impressive supersaloon, and alongside its Mercedes-AMG E63 S counterpart has redefined performance in this generation not through its power output, but in its ability to put it to the ground with the introduction of four-wheel drive. As a result, tuning companies such as Manhart can go even further with their power upgrades without the worry of the traction limitations that plagued these sorts of tuner specials in the past. We look forward to putting this one on a drag strip.