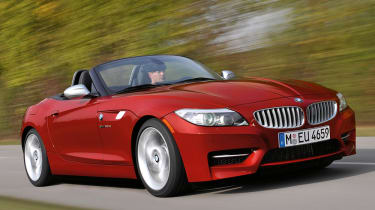 BMW isn’t making a proper M Division version of the new Z4 roadster. If that’s the car you were holding out for, though, then fear not, as there’s an alternative coming next year. This is the BMW Z4 sDrive35is (we’ll call it the Z4 S, if you don’t mind) and it’s the closest we’ll get to a successor to the Z4 M and M Roadster. And happily, its performance is more than a match for the pair of them: it packs a tuned version of the regular Z4 35i’s 3-litre straight-six engine, with 330bhp and 332lb ft on tap, the latter available from a big-TDI-like 1400rpm. There’s also an overboost function that cranks things up to 369lb ft. That’s comfortably more than a Ferrari 430 Scuderia or Porsche 911 GT3 RS. Despite the Z4’s slightly porky 1.5-ton weight, the Z4 S hits 62mph quicker than its lighter Z4 M predecessor, in 4.7sec. Its limited 155mph top speed is identical. The extra power over the Z4 35i’s regular twin-turbo 3-litre comes courtesy of increased air intake flow and a cranked up boost pressure, while the engine management system is also tweaked. Despite more poke, the Z4 S is expected to boast unchanged fuel economy and carbon emissions figures – 31.4mpg and 210g/km respectively. It’s largely thanks to BMW’s decision to spec the Z4 S purely with its seven-speed twin-clutch auto, while Efficient Dynamics technology is also present. There are appropriate M Sport dynamic changes, too, with a retune for the electric power steering and M suspension that drops the Z4 by 10mm. Subtle exterior upgrades include beefier bumpers, new alloys and silver mirror caps. The BMW Z4 S will debut at the Detroit motor show in January 2010, with sales following in March. In the UK it'll cost £43,885. BMW is also launching an M Sport design kit for lesser Z4s, previewed by the car pictured in white.