The launch of an all-new Z4 this year means now’s a good time to take a fresh look at the Z4 M Coupe, a proper M-car with real future classic potential 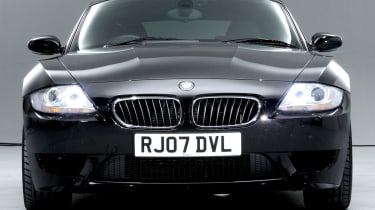 The Z4 M Coupe, launched in 2006, seemed almost sensible after the Marmite looks of the oddball Z3 M Coupe that had preceded it. But in its own way it was every bit as striking. The long swooping bonnet, the juxtaposition of curves and hard edges and the abruptly truncated tail gave it a strong character all of its own until it was finally replaced by the new Z4 earlier this year.

But the important aspect, as ever, is the driving experience, and the Z4 backed up its bold lines with a bona fide M Division powertrain. The heart of it is the special grey-cast-iron-block 3.2-litre straight-six (they used iron for the extra rigidity at high rpm). Designated S54, it’s the last in the M50 line of engines and has all the best tech thrown at it, including individual ‘fly by wire’ throttle bodies and dual variable cam timing (VANOS in BMW-speak) which all helped it to pump out 338bhp at 7900rpm and 269lb ft of torque at 4900rpm, with an 8000rpm red line.

The gearbox is the superb Getrag six-speed manual, very reliable and easy to use, although the clutch delay valve can make very quick changes tricky and many owners remove it. Performance is suitably brisk, with 0-60mph in around 5sec (top speed is electronically restricted to 155mph), all accompanied by one of the best engine notes of any modern car.

The chassis isn’t one of BMW’s most polished, but it’s never less than engaging, with communicative steering and a busy, occasionally jiggly ride over coarse surfaces.

It’s a practical car, too. The interior is well laid out, the dash easy to read. There is ample space in the boot for weekend luggage, and although the seats are more orientated towards short bursts of track use, they are reasonably comfy on long journeys. Parking can be a little tricky until you get used to not being able to see the corners of the car – the bonnet bulge hides the nearside front corner remarkably effectively, and although the rear of the car is close at hand, the high window prevents you seeing bollards!

All in all it’s a fast and charismatic coupe, and a sensible proposition as a sports tourer, as well as making an excellent trackday blaster. Now to find a good one… See Checkpoints

‘OK it’s not perfect, but every drive is an event, from the way the car accelerates out of a turn with the rear struggling to drive hard, to the steering giving enough feel to let you know just how much grip there is at the front.

‘The car understeers a little more than is ideal, but once you learn how to get over this there was honestly very little to fault.

‘You can never relax, but you know what? You forgive the car just because of that magnificent engine. It never leaves you wanting more from it. It’s grunty yet has such a wonderful top-end rush.

‘The car was faultless in the time I owned it, never a missed beat or had an issue. My only regret was getting rid of it because I needed four seats.’ Christopher Williams