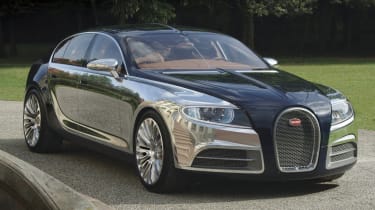 The 16C Galibier, a concept for the Bugatti Veyron’s big brother, has just broken cover and is being designed and engineered to be the fastest four-door saloon in the world.

Equipped with a twin-supercharged (rather than turbocharged) version of the W16 found in the Veyron, this concept is being touted by Bugatti as ‘a driver not a glider’ – the emphasis is being firmly placed on it being a car to be driven, not chauffeured in. No official power figures have been given, but we’d expect this to be good for around 800bhp or more.

The car’s chassis and main structure is mostly made of carbon fibre, while the super-shiny wings are polished aluminium.  If this doesn’t take your fancy, however, you will be able to have them as regular painted bodywork.

Like the Veyron, it’ll also come with four-wheel-drive and carbon ceramic brakes to help keep it out of the hedges. And to put the Galibier’s frankly enormous dimensions into perspective, those are 22-inch wheels it’s sitting on.

The Bugatti 16C Galibier is named after the Col du Galibier, a mountain pass in the Swiss Alps and will be on sale around the end of 2012 or early in 2013, giving the designers plenty of time to address the looks – something Bugatti says is subject to change between now and its release.

Although no fixed prices have yet been announced, it’s almost certainly a case of, “if you have to ask…” and like the Veyron, it’ll be sure to remain rare, with a projected run of just 300 units a year.