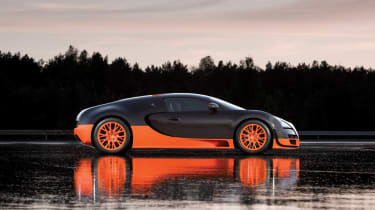 Bugatti has announced that it has sold the final Bugatti Veyron, marking the end of the official production run of 300 Veyrons. Production of the open-top Grand Sport will continue.

Bugatti set itself the aim of selling 300 Veyrons when production began back in 2005, but it took the Franco-German company - which is part of Volkswagen group - nearly six years to meet its target. Several special and limited editions helped to make up the total, including the 'Pur Sang' and the 1170bhp Super Sport.

The buyer of the final car is an unnamed European who has never purchased a Bugatti before, and delivery is scheduled for next Autumn.

‘In the Veyron the Bugatti team has created a vehicle that has already become an icon of automotive history,’ said Wolfgang Durheimer, Bugatti president, ‘both technologically and in terms of design, the Veyron is still far ahead of its time.’