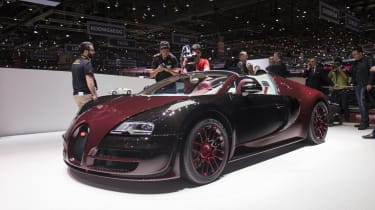 The final Bugatti Veyron, called the 'La Finale edition' has been rolled out at the Geneva Motor Show. Already sold to a customer in the Middle East, it is essentially a special edition Grand Sport Vitesse.

The car is the last in the Veyron's 450 vehicle production run, 150 of which were convertibles. The La Finale edition features a red and crimson carbon colour scheme with a bespoke interior.

Headrests have the 'La Finale' text stitched into them, while the colour maroon is used extensively throughout. The wheels are colour matched to the interior. A bronze Bugatti elephant logo is mounted on the storage cover within the car's interior. 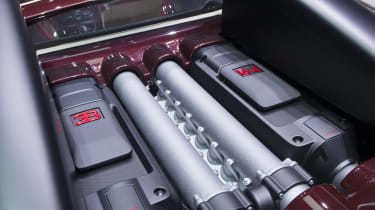 Mechanically the car is identical to a Grand Sport Vitesse. It features a 1184 hp quad-turbo W16 engine with a 0-60 mph time of 2.6 seconds. Top speed is an incredible 255mph.

Bugatti has already pointed to development of the Veyron replacement. While details remain scarce, the car is currently being worked on and we do know it will make use of the powerplant found in the current Veyron range.