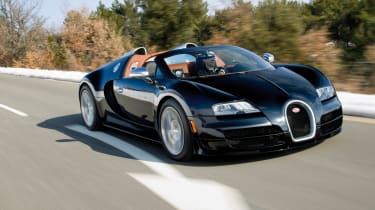 It costs 1.65million euros, reaches 255mph and transfers 1183bhp to the tarmac from its W16 cylinder, quad-turbocharged engine. It is the world's fastest roadster.

Bugatti has liberated nearly 200 extra bhp from the standard Grand Sport’s engine with larger turbochargers, new water-to-air intercoolers and a tweaked ECU. That's a fifth more horsepower, or a whole Renaultsport Clio. Torque is 1106lb ft, delivered from 3000rpm to 5000rpm - that's a little higher than the 'small-turbo' standard Veyron.

The Veyron's four-wheel drive system is retained, as is the seven-speed DSG twin-clutch gearbox - albeit with reinforced internals.

Springs and dampers are new, the monocoque has further layers of reinforcing carbonfibre and - get this - fuel consumption is improved. Not that you'd notice, or care.

Extraordinary. Unique. Thrilling. It has been said many times, but the Veyron's single most impressive feature is its ability to sustain seemingly endless levels of acceleration. But this is evo, and raw pace is nothing without driver involvement - and perhaps what's not said enough is that the Veyron engages with the driver more than you'd expect. The steering is light and responsive, the brakes offer terrific feel and the throttle response good. The driver controls and feedback are such, and this will sound absurd, that you can hurl the car around pretty soon after stepping inside for the first time. And of course, with the roof removed the visceral dial goes all the way up to 11.

Negatives? You feel the weight of the engine and gearbox pushing you forward in the braking zone, which in turn translates into understeer. Get on the power, and this is forgotten as the car hooks up and fires you onwards. Traction is never an issue - but then we didn't drive it in the wet...

To what? A private jet? A motor cruiser? An expensive mistress? Bugatti admits that the Veyron is rarely chosen instead of another supercar. Most owners already have a Ferrari Enzo or Porsche Carrera GT, and many also have one, or two Veyrons in the garage already...

In pure performance terms, only Koeniggsegg and Pagani get close - and subjectively speaking there's a sense of indomitable strength in the Bugatti that neither rival can match. Anything else I need to know?

In this realm, unfettered choice is the norm. Normal purchasing dilemmas do not apply.

Customers can have pretty much whatever they want, so exclusivity, owner experience, factory relationships and kudos are the key differentiators when it comes to buying decisions. The Bugatti Veyron Grand Sport Vitesse, while not ultimately as engaging as an Enzo, Carrera GT or the Pagani Zonda, is all this and more - offering overall driveability, unburstable engineering, colossal acceleration and the kudos of being the world's fastest roadster. It is a magnificent car.