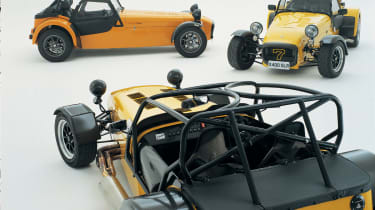 One of the key things with Caterhams is that their relative simplicity and availability in kit form encourages owners to work on them themselves. Don’t worry if the car you are looking to buy was bolted together in a garden shed, though, as the very thorough SVA test it must subsequently pass will have ensured that it is roadworthy.

If the car has been serviced at home, check the level and quality of all fluids. If they look good, get the car inspected by an expert (Caterham itself offers such a service).

Upgrades and personalisation are rife within the Caterham community, making it virtually impossible to find a completely standard car. Often the alterations are merely cosmetic, but some cars have been transformed into full-on racers. Such upgrades can have a detrimental effect on resale, but can also make for a bargain if you’re buying. Be careful though. Find out exactly what work has been done and get plenty of advice before taking the plunge, particularly if engine modifications are involved.

TrackdaysDon’t be unduly concerned about cars that have seen track action – after all, it’s what they’re built for, and even if you buy one with the sole intention of using it on the road you will soon be tempted yourself. As long as the appropriate extra oil changes and maintenance have been carried out there should be no problems.

Crash damageUnlike monocoque cars, it is perfectly possible for Caterhams to be repaired to an as-new condition – even if you bend the square-tubed spaceframe chassis, the damaged sections can be replaced. The exposed nature of the Seven means that you can examine the chassis closely for both condition and signs of damage. Salty roads can corrode the chassis if the powder-coating becomes damaged from stones (or gravel traps), so take a good look underneath.

EnginesSeveral catastrophic engine failures early in the life of the R500 led to concern from owners about the unit’s reliability in 230bhp form. However, it transpired that these failures were mainly caused by user error. Gaining such an incredible power output from a normally aspirated engine means the tolerances are tiny, with the clearance between the valves and pistons very small. Normally this is not a problem: the engine has a rev limiter to prevent unwanted interaction. However, the engine can still be over-revved if you change down too early – a mistake usually made on track. This is known as ‘buzzing the engine’ and the final damage may not occur until some time later – quite possibly when the car is being driven normally – creating confusion as to the original cause. This problem can occur with the R400 and the R300 too, but the R500 is the most susceptible due to the smaller tolerances.

All three cars have a service interval of 3000 miles. This is primarily for the oil and filter to be replaced, but the whole car should also be given a thorough spanner-check. At 6000 miles the spark plugs should be replaced, suspension checked and wheels realigned, while at 12,000 miles the engine mountings and the sump’s foam baffle should be replaced. Finally, at 24,000 miles, brake hoses, brake fluid, coolant, the fuel filter, the coil lead, the distributor cap and the rotor arm are all due to be replaced.

Because of its race car-like nature, the R500 engine will need to be ‘refreshed’ after 3000 track miles. Most owners have the work carried out by the engine’s original builder, Minister Power, at a cost of between £2000 and £3500, depending on the amount of work required. As a precaution it’s also advisable to replace the cambelt every two years – they have been known to break if run for longer.

Keep an eye on R400 or R300 engines that are not dry-sumped as they do not carry a lot of oil. On a trackday, check the level regularly throughout the day. If you are planning to use the car on track frequently it’s worth finding one that has the dry-sump system as it will prevent oil from surging during sustained periods of high-speed cornering. It was a £1000 option (the R500 got it as standard) and would cost a similar amount to have retro-fitted.

Brakes/suspensionDue to the relatively low mass that the brakes have to deal with, pads and discs last very well. It’s a similar story with the suspension, the only regular maintenance area being the bushes, which should be replaced every 3000 track miles. They only cost a few pounds, though, and are simple to change.BodyworkThe aluminium panels are easily damaged if you are careless. The boot area, for example, can be dented if the jack is left loose. A painted re-skin of the rear will cost around £500, so it’s an expensive mistake to make. The carbonfibre nose and wings are also considerably more expensive to replace than the fibreglass versions – an unpainted nose cone is £600, for example. Unpainted aluminium requires a lot of polishing to keep it shiny and it will ‘pit’ if exposed to salty roads and not immediately cleaned.

PricesR300s begin at around £18,000 privately, while £20K is the starting point for R400s and a couple of thousand more will secure a well-maintained R500. Caterham itself usually has a good selection of each model available second-hand (you can view its current stock on the company’s website). Its cars cost up to £2000 more than similar models on the private market, but they come with a three-month warranty and 12 months’ RAC cover.

InsuranceCaterham has its own scheme with Competition Car Insurance, offering very cheap premiums considering the level of performance available. The average premium is around £300. A range of packages that include trackday cover are also available.