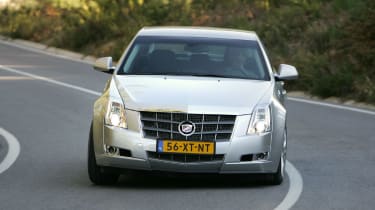 Here’s the problem. Cadillac, arguably the most famous automotive brand in America and one with vaulting global ambitions, hasn’t cracked the UK. The models assigned to the task – most recently the CTS saloon – weren’t up to snuff. And they looked a bit odd. And, well, in a sceptical Europe, no one much cared about Cadillac, anyway. That just 450 sold in the UK over the past two years tells its own story.

The good news is that the new CTS is a much better car than the old one. From some angles it’s now almost handsome in a European kind of way, while similar strides have been made inside with design, materials and tactility, though claims that Audi was benchmarked in these areas only makes you wonder why Cadillac didn’t take more detailed notes: the knuckle-rap test betrays a most un-Audi-like lack of solidity beneath the surface.

On the other hand, you get a decent slice of power and on-the-pace engineering with the range-topping 3.6-litre V6, which boasts direct injection, variable valve timing and 306bhp. Said to be good for 0-62mph in 6.3sec and an electronically limited 155mph, it’s uncannily quiet at tickover but sounds almost V8-like under load. It’s peaky, though, only really coming alive between 4000 and 7000rpm.

Given that the ‘learning’ behaviour of the auto transmission in Sport mode is not unlike that of a hyperactive 10-year-old who’s just drained a 2-litre bottle of Coke, the six-speed manual makes for a less frenetic life. There’s nothing jittery about the chassis, though, which, if not the last word in incisiveness, is grippy and supple enough to remain poised under pressure and rides comfortably into the bargain. The brakes deliver plenty of progressive bite, too.

The bad news? The CTS still feels like a work in progress, one that’s some way yet from the European opposition. Which is frustrating, because the business case for bringing over the CTS-V when it appears (think 4wd, 500bhp cut-price M5) depends on how well the regular CTS sells here. Let’s just say we wish it well.