You’ve read about the greatest icons from the last 100 issues. Here are the dogs 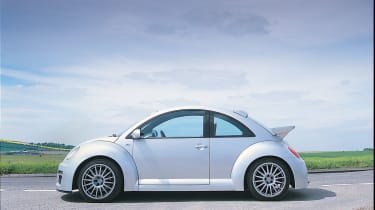 Which car was so embarrassing to be seen in thaat no-one would drive it? Which long-termer was so bad we sent it back? Which car was so ugly we refused to feature it? The answers lie below.

Cars that don’t quite make the top ten of awfulness include the Invicta S1, which even John ‘It’s got four wheels, so it must be at least four stars’ Simister couldn’t bring himself to love, the not-a-patch-on-its- predecessor Peugeot 206 GTI, and the Lexus GS430, of which Harry wrote, ‘I simply have no desire to drive the GS430 ever again’.

Hayman wanted to nominate 'every single non-exotic car that has a semi-automatic gearbox. Also, every “fast” Saab we ever tested.’

Then there's the Grinnall Scorpion IV – 'Loads of power that it couldn’t cope with and it felt like you were going to fall out of it through the turns’ according to Roger Green – and the current Mazda MX-5, saved from inclusion by the lingering suspicion that we’re still yet to drive a properly set-up example.And finally, a special mention for the one car that we refused even to feature in the mag, simply because it looked so goddamn awful. Who could forget – and God knows we’ve tried – the FBS Census? (Not pictured - ever).