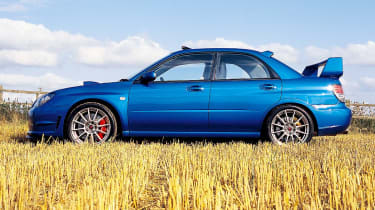 There comes a point in Litchfield Import’s Type 25 Impreza when a voice in your head simply says ‘Enough!’ It’s the voice of reason, and when it speaks, you listen, for once you’ve been overwhelmed by this Impreza’s amazing pace, it’s best to ease off the throttle, slowly exhale, and feel a strange serenity wash over you as the adrenalin rush subsides. The calm after the storm.

We’re used to rabidly quick rally missiles here at evo, but Iain Litchfield’s latest creation is from another planet. Based on the lightweight Impreza WRX STI Spec C homologation special and developed to Litchfield’s imaginative and exacting specification, the Type 25 is packed with the kind of performance-enhancing engineering that makes you go weak at the knees.

At its heart is a 2.5-litre version of Subaru’s turbocharged flat-four, which replaces the Spec C’s standard 2-litre lump. Built to Litchfield’s requirements by Cosworth Inc, the US arm of the world-renowned engine builders, it’s a magnificent motor, featuring Cosworth’s own forged pistons and conrods, together with a special STI crankshaft and STI engine casing. The rotating assembly is balanced to within 0.5 grams and hand-assembled by Cosworth’s technicians, before the ‘short’ engine is crated and sent to Litchfield’s Gloucestershire base. Once in the UK, PowerStation, another of Litchfield’s technical partners, goes to work on the Cosworth-honed, big-valve, ported cylinder heads, completing the build with the appropriate sensors, shims and cam profiles.

The bespoke development doesn’t stop there. Working with exhaust specialist Milltek, the Type 25 benefits from a purpose-built twin-scroll inlet manifold, which is ceramic coated inside and out to manage heat build-up. Mated to a bespoke Garrett turbo, and using PowerStation engine mapping honed through hundreds of hours on the dyno and thousands of miles on road and track, the Type 25’s engine is one of the most thoroughly developed independent projects we’ve encountered.

Litchfield’s target was to get as close to matching a Porsche 997 Turbo’s power-to-weight ratio as possible. With 304bhp per ton, the Type 25 actually eclipses the all-wheel-drive icon by one precious horsepower, but that’s only half the story, for the Type 25’s chassis has been as thoroughly developed at its engine.

With thicker, adjustable anti-roll bars, modified subframes, increased castor angles, 12-way adjustable AST suspension (complete with in-car adjusters for ease of use), revised damper settings and height-adjustable top mounts, the Type 25’s set-up can be made compliant for road use, aggressive for track use, or set anywhere inbetween.

Predictably, the Type 25’s combined talents make it a fearsome package. The engine sounds like no Impreza you’ve ever heard before: sharper, keener, freer, but with just enough of Subaru’s old-school dugga-dugga to elevate it above the anodyne drone of Mitsubishi’s fiercest efforts. You hear – and feel – the turbo spooling up the instant you squeeze the throttle; a split-second of insistent, high-pressure hissing before you’re scooped up and propelled down the road by a dizzying gust of acceleration.

Power away from a standing start and you’re constantly throwing gears at the thing. It feels explosive, but once into fourth, fifth and sixth you really begin to appreciate the enormous, tractable reserves of torque. Corners where you’d consider third gear are now easy meat in fourth, the taller gear and tumultuous torque combining to deliver sustained, eye-widening shove. It’s the same in fifth and, incredibly, sixth gear as well.

This is Litchfield’s first Type 25 demo car, and is fully loaded as a result. Inside you’ll find a £1995 leather re-trim, while outside a set of gorgeous Enkei 18in STI alloys (£1200) wear superbly sticky Yokohama AO48 tyres (£600). The brakes are also seriously uprated, a £1695 option comprising 360mm grooved AP Racing discs, massive and seriously cool six-pot Porsche callipers, Pagid pads and braided brake lines. Such grip and retardation is a devastatingly effective combination, although with so much road-holding and stopping power in reserve you barely scratch the surface of the Type 25’s abilities. On everyday roads this car isn’t just fast, it’s ridiculously fast.

However, it isn’t the ferocious pace that distinguishes the Type 25 from its peers. What stands out a mile is its polish and cohesion. Every aspect of the car has been carefully conceived, painstakingly developed and expertly applied. The Cosworth connection adds huge credibility to an already well-respected concern, while the Type 25’s Spec C underpinnings give it a true motorsport pedigree. Imprezas don’t get any better than this.