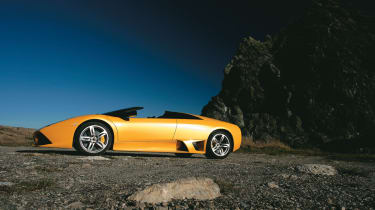 I can’t tell you what a roofless 205mph feels like because I lost my bottle at just over 170. At this rarefied velocity, wind turbulence has enough power to drown out the wild shriek of a wrung-out Lamborghini V12 pumping out 631bhp just a few inches from your ears, while the storm whipping around your scalp becomes so violent it threatens to suck your head off your shoulders. An experience that was thrilling just a few seconds ago grows increasingly hostile with each additional mile-per-hour, to the point where it’s just too uncomfortable to go on.

In the same vein as the Veyron, the buzz from the monumental v-max of the Lamborghini Murciélago LP640 Roadster comes not from terrifying yourself attempting to verify those top-speed boasts, but just from the knowledge that it’s theoretically possible.

Undoubtedly the best bits all happen between zero and 150mph. Aurally they happen at just over a ton, with your right foot buried deep into the carpet and the soaring revs climbing towards the business end of fourth gear. The swirling air has yet to distort the purity of the exuberantly aggressive soundtrack. In fact, here it adds to the intensity, blowing the epic 12-cylinder cacophony around the cabin, enveloping you in the outrageous wail as though filtered by the latest Dolby 5.1 surround-sound system. And then, just when you think life can’t get any better, you find a tunnel…

The LP640 looked a likely candidate for Roadsterisation as soon as the 6.5-litre evolution of the iconic V12 proved to be significantly superior to the 6.2 installed in the original Murcie rag-top. Smoother, sweeter, more sonorous and endowed with an almighty kick from 4000rpm all the way to the 8000rpm limiter, it is arguably the finest powerplant ever to have come out of the Sant’Agata factory. Where the 6.2 would send vibrations through the chassis at high revs, the 6.5 just pours on the power.

Mixing the LP640’s hard-edged, muscular styling with the Roadster look has created probably the most visually arresting Lambo since the Anniversary Countach. The wide windscreen combined with the cut-down side-screens gives it the appearance of a supercar wearing Oakleys. Be in no doubt, the Roadster is seriously cool.

Unless, that is, you fit the roof. As the Roadster is designed to be a barchetta rather than a full convertible, the canvas cover is to roofs what a space-saver is to tyres – only to be used in an absolute emergency. The mix of rods, poppers and bracing struts will have your head spinning and thumbs aching, and erecting the contraption takes at least five minutes. You’re even speed-limited with it up (160kph or 99mph) to prevent it blowing away like a tent in a gale. Probably best to do what we did – leave it behind.

Flick up and pull on the handle, and the door arcs skywards in the same slickly damped manner of the coupe. With both doors up, the centre section appears surprisingly exposed and vulnerable to torsional twisting; without the fixed roof, you wonder whether the floorpan alone can provide enough strength to contain the might of all that power and torque. The Roadster, however, benefits from a revised backbone structure that uses both steel and carbonfibre, bonded and riveted, along with an engine bay covered by a comprehensive web of bracing struts (either made from steel or, as seen here, in carbonfibre for a £3000 premium).

The result is remarkably impressive. The steering column occasionally shimmies over sharp potholes, but regular bumps and cambers are soaked up easily enough, while overall composure remains surprisingly comparable to the fixed-head car. Most of the strength in the coupe structure must also be in the floor then, because the weight penalty for choosing an open car is a negligible 25kg.

We take the Roadster to the same roads where we tested the coupe LP640 six months ago (093). The Raticosa and Futa passes south of Bologna are narrow, winding and riddled with tightening turns and testing, bumpy apexes to catch out the unwary. As a supercar test route it’s as tough as they come; if there are any weakness with the Roadster’s chassis, we’ll discover them here.

The steering requires a firm hand, particularly through hairpins, but, as before, it lightens at speed, feeding a high level of confidence-inspiring detail back through the thick suede wheel and allowing accurate placement – vital in such a wide machine.

The springs and dampers have been revised from those fitted to the coupe LP640, however the resulting handling characteristics remain very like those of the coupe we drove on eCoty (evo 099), suggesting there was something wrong with the first coupe which we drove here. That car was a nightmare – very edgy in corners, permanently on the tips of its toes. The Roadster feels much more benign, much more settled and driveable. Its set-up allows for a mid-turn rethink should it prove necessary. Need to tighten your line? No problem. Push hard and the nose eventually begins to scrub wide – and if you leave the traction control switched on, this is as far as things will develop, the electronics neatly keeping everything on the curved and narrow.

Switch the system out and initially the results are the same, with the gentle understeer building further and the nose running wider still. Back off now and the Pirelli P Zeros recover their hold on the tarmac without fuss. Stay on the power, however, and things rapidly become very exciting indeed. The 13in-wide rear tyres are finally overwhelmed by the onslaught of power and flick wide, and when it happens you’d better be ready to deal out some rapid and decisive corrective action, for there’s a whole lot of mass on the move. Don’t panic and jump off the power, though – the sudden weight transfer will accentuate the slide to dramatic, road-filling proportions. Instead, balance the throttle and the LP640’s four-wheel-drive system will divert more motive energy forwards, giving the front added bite and pulling the Roadster clear from the slide.

Drive just under this rather hairy zone and the alfresco Lambo flows over these near-deserted mountain roads, each pull of the right-hand (optional) e-gear paddle unleashing another savage burst of inexorable thrust. The (again optional) carbon-ceramic brakes with six-pot callipers perform tirelessly all day, repeatedly hauling off speed with a firm and consistent feel, allowing you to develop a rhythm similar to that in the coupe and cover the ground at a similarly scorching pace.

Out here, when you’re wrapped up the drama of it all, the small degradation in structural rigidity and the tiny weight penalty count for nothing. Coupe or Roadster? It all boils down to whether you like driving occasionally in the rain.