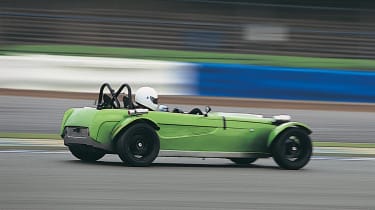 One of the surprise packages of 2006 was the Toniq-R, a student project turned seriously convincing Caterham alternative. The first Toniq we tried was fitted with the flyweight Honda Fireblade engine, and its sweetly balanced chassis obviously benefited from the lack of weight sitting over the front wheels. However, the appeal of bike-engined cars is always very limited and this, the Ford Duratec-engined version, is the car that will sell in bigger numbers and perhaps be a truer indicator of Toniq’s ability to set up a trackday car.

Fully built, this 193bhp, 174lb ft Toniq costs £23,500. Great value when you consider how quickly the price of a similarly powerful Seven can escalate (our old R300 long-termer was nudging £30,000). But when you buy a Caterham you know you’re getting a truly outstanding drivers’ car. Does the Toniq-R really compare?

Well, it certainly feels at least as well built and the interior treatment is very nicely detailed. The driving position is spot-on, too. The engine feels crisp and urgent, if lacking the fireworks of a CSR or the snappy response of a K-series Caterham; the gearshift is short, meaty and precise. Only a slight dead patch at the top of the brake pedal’s travel seems at odds with the focus and precision of the rest of the controls.

The chassis, at least on Silverstone’s smooth surface, feels excellent. The steering is as quick as you’d hope, there’s loads of grip and ample traction from the Yokohama A048 rubber and the balance is nicely neutral. As speeds increase it doesn’t feel quite as pin-sharp, as communicative or as agile as a well sorted Caterham, but it’s as close as I’ve experienced from a Seven–alike. There’s just a shade too much turn-in and mid-corner understeer at present, but I’m sure with time it’ll get even better. Definitely worth a look.