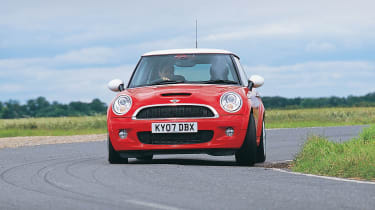 The official ‘Works’ performance kit for the Cooper S is still a couple of months away, so if you want more power for your Mini right now you have to go down the non-official route. Morego is the first company to have tweaked the turbocharged 1.6-litre engine and the results are pretty spectacular. Power is up from 172 to 216bhp and peak torque rises from 192lb ft to a mighty 235lb ft spread evenly between 2200 and 4600rpm. Big numbers for a smallish hot hatch, especially given that the official Works kit will offer ‘just’ 192bhp…

Morego has found the extra power through some judicious ECU tweaking and a new turbo-back exhaust system with a sports catalyst. The kit costs £1640 fully fitted, though you can have the remap on its own for £580, boosting the outputs to 205bhp and 228lb ft respectively.

The power delivery with the full kit is excellent, mirroring the standard Mini’s strong low and mid-range stonk and building to a fierce top-end. It’s Cooper S as we know it, just with the power and torque curves bumped up 25 per cent. However, on light throttle openings it’s not quite as smooth as the standard car, giving the occasional hiccup as you roll on and off the accelerator.

Traction is obviously a limiting factor, but the front tyres cope admirably with the demands put upon them and the traction control is beautifully judged, almost acting like a limited-slip differential out of tight corners. Turn off the electronic aid and it’s a bit more frantic, wheelspin and torque-steer taking hold of the chassis and pinging the Mini from verge to white line in the first three gears. It’s not unpredictable and grabby like a Focus RS, but you certainly need to be sensitive to make the most of the performance available.

However, you can only judge the conversion as a success. Driven back-to-back with the standard car the Morego is substantially quicker, feeling especially strong in fourth and fifth, where you can enjoy the thick seam of torque to the full.

Morego has also been busy with the Mini’s chassis and offers progressive lowering springs and modified front wishbones (£1170). The springs bring a more supple low-speed ride, but the new wishbones, which allow greater negative camber with the aim of reducing understeer, are less successful, the front end washing wide at a seemingly similar speeds to the standard car. You also lose too much in terms of steering feel to make this change worth recommending.

The four-pot AP Racing brake kit (also £1170) is different story, with superb pedal feel and no sign of fade even under very hard use. Perfect when coupled to such a quick engine. You’d probably want less extreme pads than the track-orientated items fitted to Morego’s demo car though, as they take some time to get up to temperature.

The prices all add up, of course, but if you want the quickest S on the block then the Morego Cooper S T-spec might just be irresistible.