With its 600RE, Roush is giving ten of the last Ford GTs over 600bhp 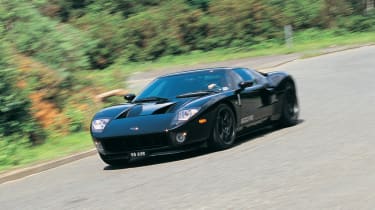 We’ve got enormously fond memories of the Ford GT. From the moment Jethro Bovingdon experienced an early example at the US launch (evo 061), to the moment we crowned it our Car of the Year in 2005 (087) it never failed to impress, seduce and surprise.

When, at the end of 2006, Jethro returned to the States to see the last Ford GT roll off the production line (099), we thought we’d seen the last of Ford’s first (and perhaps last) production supercar, but thanks to the enthusiasm of the UK’s best-known GT sales specialist, Avro Motor Cars, and the engineering nous of Ford tuning specialists Roush Europe, the Ford GT is being given a stirring farewell.

Called the Roush 600RE, this run-out GT is the brainchild of Avro’s proprietor, Andy McGrath. Having been the first to bring a GT into the UK for independent sale, McGrath’s bond with the Ford supercar is strong. Now, having forged a great reputation for sourcing GTs from the US for the UK (and further afield), the 600RE is available only from Avro’s impressive showroom, located a stone’s throw from the decaying concrete banking of the Brooklands race circuit in Weybridge, Surrey.

Taking pride of place in the showroom is the blackest, meanest Ford GT you’ve ever seen. With no stripes, and fitted with black powder-coated rims, McGrath’s demonstrator is a sight for sore eyes. As you’ve no doubt already guessed, the ‘600’ refers to the new power output, although in the case of this particular example it should be called a 612RE, for the dyno plot scribes a neat 45-degree red line all the way to 612.6bhp, a 62.6bhp gain on Ford’s claimed output for the standard GT. Torque takes a similar hike, up from 500lb ft to 552lb ft at just 3824rpm. Perhaps more impressive is that the Roush-tweaked motor delivers 400lb ft of that from barely above tickover.

In typical supercharged fashion, the gains have been achieved by fitting a smaller-diameter pulley to the blower. This increases the supercharger rpm, the boost pressure and, ultimately, the amount of mumbo reaching the rear wheels. Roush has also replaced the engine hoses, added an oil-cooler to the transmission and fitted a lightweight Tubi exhaust, which has the welcome bonus of a more appropriate (yet still sensible) exhaust note.

Roush could have used the 600RE as an excuse to make the GT harder and more extreme, but instead it has wisely steered clear of making any changes to the GT’s springs or dampers. As a result, once clear of Brooklands and out on the fast A- and B-roads that criss-cross Surrey’s woodland and heathland, the 600RE is a mighty partner. Huge overtaking ability is but a brush of the accelerator away, yet such is the tractable nature of the motor and the pliancy of the standard road-biased chassis set-up that this ultimate Ford remains docile and inspires great confidence at all times.

Yes, the steering initially feels lighter than you expect, but you soon remember that the GT is about delicate inputs, not brute force. Once you get used to the lack of steering effort required, and the front end’s habit of sniffing at cambers under braking, you’re free to enjoy the big Ford’s intrinsically friendly nature and remarkable poise.

Opportunities to extend the 600RE are few and far between, especially in Surrey, but when we find some space all 612 horses make their unforgettable presence felt. Squeezing on the power in fourth and feeling that addictive sensation of endless, locomotive power is hugely addictive. It’s an experience made all the more memorable by the new big-bore exhaust, which though still mellow transforms the GT’s voice from muted rumble to beefy bellow.

When you’ve got such an abundance of grunt to begin with, an 11 per cent gain isn’t going to blow your socks off, but as Roush built the engines for the standard GT you know the gains are real and in the right places. You’d need to step from a standard car into the 600RE to truly appreciate them, but suffice to say that unless you’re downsizing from a Veyron, this satanic-hued Ford feels extraordinarily rapid in any gear at, seemingly, any revs.

McGrath is keen to stress that there will be a maximum of ten 600REs, of which half are already sold. Apparently the only problem is supply. Since GT production ceased, all those cars held in US dealerships suddenly increased in value. Indeed many of them appear to have been tucked away by canny dealer principles looking to a time where mint, zero-mile GTs will command even bigger money. Consequently new examples are increasingly hard to source, not to mention more expensive to buy.

As a result, although the first 600REs went for around £141,000, it’s hard to predict exact prices for the last few. As McGrath has three new standard GTs in stock priced between £130,000 and £135,000, it’s likely the last 600REs will be more money than the first. Are they worth it? Well, the standard GT isn’t a car that strikes you as lacking performance, but the gains are noticeable and worthwhile. Then there’s the rarity value and the satisfaction in knowing you’ve got the most potent semi-official GT ever built. And if that’s not enough, remember: because the chassis has been left unmolested, the GT’s supple, sweet dynamics have been preserved. All gain and no pain, the 600RE is an instant classic.