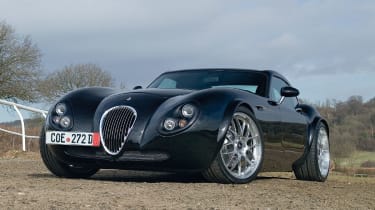 Nothing wrong with that. Far from looking like a startled, bug-eyed monster – the usual fate that befalls a shape-shifter frozen, mid-morph, in a terminal state of indecision – it is instead a rather beautiful coupe with enormous presence: tense, flushed with adrenalin, athletic, almost painfully graceful. As the late, great Canadian jazz pianist Oscar Peterson so often proved, it isn’t so much what’s in your ‘bag of tricks’ (the well rehearsed riffs and licks that can be instantly called upon to embroider any piece) but how skilfully you string them together that counts.

The Wiesmann brothers, Martin and Friedheim, displayed admirable, two-handed dexterity when they decided to branch out from what must be the rather mundane business of building third-party hard tops for convertibles and, in 1993, unveiled a whole, fully formed ’60s-inspired roadster built around a galvanised steel chassis and using modern BMW running gear.

The Wiesmann Roadster has now been in production for 15 years – therefore qualifying as something of a classic itself – and in its most potent ‘MF3’ guise is powered by the previous M3’s 338bhp straight-six engine. Three years ago, though, the Roadster was joined by the more sophisticated and powerful V8-engined, coupe-bodied GT, itself the result of a five-year development. With its Elise-style epoxy-bonded aluminium tub, glassfibre reinforced composite bodywork and 4.8-litre BMW V8, the GT is an altogether more potent proposition that requires its 362bhp to propel just 1240kg. The upshot is a supercar-nudging power-to-weight ratio of 297bhp/ton, in light of which the claimed 0-62mph time of 4.6sec (if not the 174mph max) seems a little conservative. Now we’re back behind the GT’s tiny wheel to sample the most recent tweak in contrast between the romance of the old and the shock of the new, namely ZF’s fastest, smoothest, smartest six-speed auto with paddles.

Wiesmann is unlikely to become a household name any time soon, but it’s little wonder that what has long been a small but lucrative market for the company in mainland Europe is spilling over into the UK. Customers who fancy the image of a classic sports car without the hassles or the antiquated driving experience have never had it so cushy.

Key to this is the notion of exclusivity (or not being part of the burgeoning refurbished E-type crowd) and the luxury of a bespoke specification. Wiesmann offers a range of handmade leather interiors with conspicuously stitched, padded, quilted and distressed finishes, ranging from the tastefully understated to the wonderfully vulgar. Our black example is somewhere in between, demurely low key apart from the acres of quite dazzling white stitching. The instruments – an unusually stacked array of dials and gauges clustered in the middle of the dash rather than behind the steering wheel – are, like the knobs and switches, circular and chromed, while the leanly padded bucket seats proudly bear the Wiesmann gecko logo. Some customers apparently prefer to have their name in the place of the tiny reptile (there’s no truth in the rumour they’re all called Gordon).

You don’t so much sit in the Wiesmann GT as wear it. Shut the door and your view of the world is cropped at just below shoulder height. From an eye-line perspective it’s more or less the equivalent of pulling on a full-face helmet. The seats could do with a little more lumbar support, and cabin space, while far from tight, isn’t exactly voluminous.

But then everyday experience falls short of the mark in lots of ways when you fire-up the Wiesmann. True, a small engine fizzed up to an explosive frenzy by a heavy-duty blower can give a scalded cat a run for its money. By comparison the Wiesmann’s naturally aspirated 362bhp has the weight and inevitability of a free-falling anvil.  Punch the pedal to the floor and the back of your nut won’t break contact with head restraint, so utterly seamless and linear is the thrust measured out by the transmission. Paddle-activated downshifts are just as swift and slick.

Be in no doubt, the Wiesmann is brutally quick. And with the ZF auto, violent acceleration requires no special effort or expertise. Gun it and you get a savage, sustained surge of power. Stand on the stoppers and the g reversal whacks your chin onto your breast bone.

Genuine dynamic composure lives here, too: a quick-helmed and super-sticky yet remarkably poised, flat-riding and limber chassis. You’ll be pushing hard when the grip eventually runs out. Keep your nerve, prepare for a stab of opposite lock and you can ride the edge with confidence. All this and a V8 soundtrack more compelling than a four-minute warning…

The Wiesmann GT is undeniably expensive at £108,000. But then it is a starkly original take on big-cube performance thuggery. It should be intimidating but it’s actually fabulously accessible. We like.

You can contact Wiesmann Ltd on 07767 688233 or find more information at www.wiesmann.co.uk