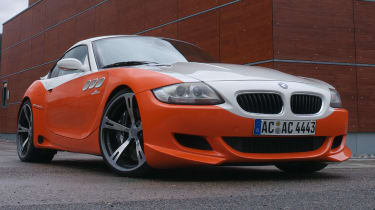 It’s impossible to ignore the AC Schnitzer Profile parked up among the ranks of black and dark green 3- and 5-series. We’ve actually flown out to drive Schnitzer’s Mini (evo 115) but the Profile seems to be crying out to be driven too. It was created for the 2007 Frankfurt show as Schnitzer’s take on the Z4 M Coupe. Strip away the lurid paint-job and the rather silly aerofoil (apparently inspired by the McLaren MP4-10, the ’95 car Mansell drove) and you actually have a very good looking car. The bodywork has been subtly enhanced in typically sympathetic Schnitzer fashion and the triple-porthole side vents are a nice touch, if a bit Maserati.

It is far from just a styling exercise, however. The wonderful 3.2-litre straight-six has been given a special ‘active breathing’ airbox and the ECU has been tweaked to release a CSL-beating 364bhp at 7900rpm. Combined with a final drive ratio revised from 3.62:1 to 3.91:1 (a £1874 option), the Profile is claimed to hit 62mph 0.3sec quicker than the standard car. The removal of the speed limiter means that the white and orange wonder can also run on unfettered to 177mph, at which point that little wing is no doubt vital.

When we’ve finished with the Mini, we manage to persuade the chaps at Schnitzer to let us have a go in the Profile. We’ve found a perfect hairpin road and it seems only right and proper to go back to it in something rear-wheel drive. The standard Z4 is a low-slung car but you sink even lower as you get into the bucket seats of the Profile. Once inside, the planks of orange carbonfibre give you a feeling you’ve been Tangoed, but the raucous sound from the sports exhaust (£1532) as you twist the key soon banishes any thoughts of fizzy drinks.

This car has a short-shift kit on the six-speed ’box (£493), which removes the last traces of slack from an already very tight action. The 20in wheels are connected to a revised suspension package (£2040), which feels quite hardcore at low speed. As the road unfolds and the pace increases, it’s clear that the standard car’s slightly soft front end still remains and you need to set the car up rather than just stamping on the throttle mid-corner if you want to start locking the rear diff and going sideways. Once it is sideways, you can hold quite large angles for quite some time, which is fun – especially because you’re sitting a long way back in the chassis, near the outside of the arc.

Two aspects of the Profile were still under development when we drove it: the engine had a mapping black-hole around 3000rpm and although after 5000rpm it would scream round to 8000 like a proper race engine, it was missing that spine-tingling induction howl of the CSL. The impressive-looking brakes were the other problem: despite having eight-piston calipers clamping M5 discs, they wilted after only a couple of big downhill stops.

As a show car, the Profile achieves its primary goal of attracting attention. And although mechanically it’s not the leap over the M car it might be, it’s good to know that you can drive it in a fashion that’s as lairy as its looks.