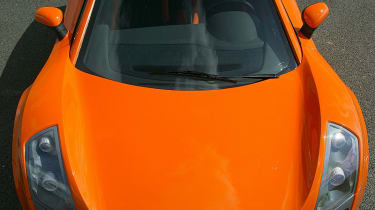 Never heard of Mastretta? Don’t worry – before the London motor show we hadn’t either. And small wonder: until now the transport design company founded in Mexico City some 20 years ago by brothers Daniel and Carlos Mastretta has mostly concentrated its efforts on buses. But that could all be about to change.

The MXT (MX for Mexico, T for transverse engine) is the first car to be designed and built in Mexico, and on paper it has hardware underpinnings to worry the establishment. Mastretta is only the third manufacturer (after Lotus and Panoz) to create an extruded and bonded aluminium chassis, although here it comes with a carbon composite floor and a rear section of chrome-molybdenum steel.

The car we’ve been granted access to is a pre-production prototype and there’s still a fair chunk of work to be completed before it goes on sale in 2009, not least replacing the 170bhp turbocharged four-cylinder VW unit that currently sits amidships with a Cosworth-tuned 240bhp 2-litre Ford Duratec motor. The brakes, wheels and interior will all change too, so our drive – at the Bedford Autodrome because the car isn’t yet road legal – serves mainly to set the scene and give us a flavour of what’s to come.

Its size and looks are a good start. It’s five inches wider than an Elise and a tad longer too, but you’d be hard pushed to tell. The lines have the kind of taut compactness that suggests lightness and purpose, and indeed the MXT will weigh around 900kg and have a top speed of 150mph with a sub-5sec 0-60mph time.

Climbing aboard requires about the same effort as getting into a Mondeo, and the driving position and general ergonomics are just so. The seats you see here will be junked in favour of Recaro items and the dash will be a digital affair, but the fact that the basics hit the mark suggests the final outcome should work well.

The suspension will be revised too, which is good because as it stands some further work is needed. It’s soft – probably to cope with potholed Mexican tarmac – making the car feel a little slow-witted on track and its rear-end too inclined to load up and squat down. The steering’s a mite meatier than expected too, making the MXT feel heavier than it should; the brilliant intimate detail served up by an Elise isn’t there yet. An extensive programme of development is planned, though, and our hope is that the finished article will have a more delicate, lightweight race-car feel, particularly as the MXT is aimed squarely at the road and occasional trackday market.

Priced at £32,999 the MXT should represent good value, so we’ll be watching its progress with interest, as, we expect, will Lotus.