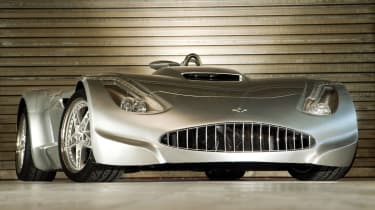 If you recognise the name Veritas, you probably need to get out more. It first appeared in the late 1940s on racing cars built around BMW drivetrains, and its proudest moment was the unveiling of Germany’s first Formula 1 car, in 1951. It branched out into road cars too – and then disappeared without trace just a few years later.

So the second coming of Veritas should hardly give Bugatti sleepless nights, especially as fewer than 15 employees work on the project and the factory itself is such a nondescript German industrial unit that we struggle to locate it. But all that ceases to matter when the prototype RSIII rolls out of the front door. It is simply mad. That front end has a different look from every angle: snake, shark, evil supervillain in the next Transformers film, take your pick. The nose will be smoother on the finished car, and so will the bulging bonnet, which was originally conceived for a V12 engine, but what you see is basically what you’ll get.

This prototype is powered by a previous-generation (E39) BMW M5 V8, but when the RSIII goes on sale it will be offered with a choice of the new M3’s 4-litre V8 or the 5-litre V10 from the current M5. Both units will be tuned, with the M3 powerplant hitting a more than substantial 475bhp and the M5 engine expected to reach an almighty 600bhp. There’s even talk of a manual gearbox for the latter, or at least a clutch pedal to work with the SMG. There will be no traction control, though, or even anti-lock brakes…

All of which helps focus the mind as I strap myself tightly into the perfectly stitched Koenig sports seat and push my sunglasses firmly in place, not so much for looks as for protection (there’s little in the way of a windscreen). This being a modern BMW-based creation, with a standard clutch, it pulls away effortlessly and handles in-town traffic with just the odd dull thud as the Öhlins suspension reaches the end of its travel. The gearlever is too far away from the driver’s seat and unnaturally high at present, and the TRW brakes come on a little suddenly, but the car handles light driving without the slightest protest, even though that’s not really what it is built for.

When pushed, the Veritas becomes a whole new animal. Even with this car’s relatively lightweight 473bhp powerplant it bursts through the 60mph mark in just 3.6sec and, it is claimed, can keep accelerating all the way to 204mph. Yet the RSIII goes beyond the supercar numbers. It’s the sheer violence of the engine note, the wind and gravel slicing into your face that mark this car apart. That and the way the wheels will spin in first, second, third and, with a serious stab of that long throttle pedal, even fourth gear. And it stops like you’ve hit a wall.

The RSIII weighs just 1080kg, and with zero body roll it simply cuts to the apex and powers out. It’s absolutely neutral and slides on command, although for big power oversteer it could really do with the faster steering rack that isn’t fitted to this example.

It’s a magnificent car then, the Veritas, but it comes at a price. The cheaper M3-based model will cost £280,000, while the M5-engined car will set you back £330,000 – both prices are plus taxes. And all that for a car that’s built around a spaceframe chassis (albeit a very strong one) rather than a carbonfibre monocoque.

That said, Veritas plans to sell just 30 RSIIIs before moving on to a coupe (with a TVR Sagaris look) and an 800bhp GT fit to take on Koenigsegg. Are there enough rich (and possibly reckless) souls in the world to cover that order book? Quite possibly. Character goes a long way in this world, and the RSIII has it in abundance. Perhaps this time Veritas is here to stay.