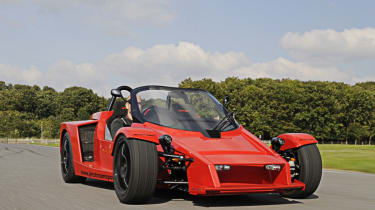 I’m not going to mention it. Make your own mind up. Don’t pretend you don’t know what I’m on about. Anyway, the Jetstream SC250. Built in Cornwall, engine and transmission from Vauxhall, handling by an ex-F1 engineer, pitched midway between Cateratom and Elise. Those are the basics.

It’s small and easy to get on with; soft seats and nothing wrong with the driving position either. The engine is positioned quite high in the chassis, though, with two-thirds of it over the rear axle, giving the SC250 the weight distribution of a mallet.

It doesn’t drive like one, though. The first impression is one of ferocious turbo noise, although the Astra VXR unit’s bark is worse than its bite – it doesn’t feel quite as quick as claimed. There’s also work needed on the heavy throttle and harsh clutch.

Then you realise just how deftly it’s rounding off potholes, and how robust it feels – no shake from the windscreen, steering or tub. It’s an adept road car – apart from the severe turbulence (a roof with integrated gullwing doors is planned).

On the track it proves equally good. It will oversteer on turn-in, but easily pulls itself straight and then understeers slightly. Good steering, super-fast gearchange and a real sense of flow. It’s not quite as playful and mobile as a Caterham, but it’s close.