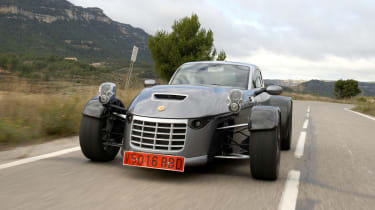 Another new sports car, faster than a McLaren F1, going to change the motoring world from a lock-up in Chipping Norton, costs a bit too much and blah, blah, blah… You’ve heard it all before. But this lock-up is in Spain and the Aspid isn’t the product of your usual fledgling car company.

For a start, IFR Automotive isn’t exactly fledgling. Before setting up his own company, Ignacio Fernandez Rodriguez, the company’s CEO, used to work for Mitsubishi and Prodrive on World Rally Cars. He hasn’t had a holiday for the past five years and, as we were still in the factory at well after 9pm being excitedly shown very complicated computer modelling software (that I was pretty much baffled by after the first click of a spreadsheet), I think it’s safe to say they’ve been a long five years.

The Aspid is an engineer’s car through and through, and is designed to show off the technology that IFR has developed. There are four patented technologies on the car, which Ignacio hopes will attract the interest of major car companies. But as he says, the only way to prove to people that the innovations really work is to put them into a complete car.

The first patent, and to me the coolest, is for the Twin Brake Disc (TBD) system. The discs look incredibly thin and spidery, coming as they do from a motorbike. Then there’s the second patent, which is on the beautiful Dual Lip Reinforcement (DLR) wishbones. The almond-shaped spars bring aerodynamic benefits, while strengthening beams run right through their hollow centres to help increase rigidity in all directions. Add the brakes, wishbones and inboard springs and dampers together and the unsprung weight at each corner is just 21kg – about the same as an F1 car.

Next up is the patented chassis construction. Again, it’s a simple design: the box-section aluminium extrusions contain a diagonal within, and are incredibly stiff as a result. When combined with sheets of aluminium honeycomb you have a chassis that looks almost over-engineered and you begin to wonder if there can be any torsional flex at all. It’s compliant with FIA safety standards, yet the whole thing weighs just 75kg.

Finally, the electronics. Ignacio (who I think is a bit of a smiley Massa lookalike) shows me the clean, white room that is IFR’s electronics lab. It’s here that three guys have designed an entire wiring loom for the Aspid from a clean sheet (or more likely sheets) of paper. As we’ll see when we get into the car, this is not just a couple of toggle switches to control high and low beam on the headlights either.

You can drive the Aspid with or without the doors and roof sections, and although I’d usually be the first to open it up to the elements, the Aspid’s USP is really the added comfort and practicality of having a proper roof and doors on this sort of car. It’s not exactly easy to get into, but it’s much less of a battle than posting yourself into a Caterham with the roof up.Once snugly inside, it’s a whole world away from the Caterfields with which it will inevitably be compared. The stitched leather, carpets and beautiful carbonfibre make it feel like a car you could travel a great distance in. And then there are the two displays. One is mounted F1-style in the removable steering wheel, just below the change-up lights and surrounded by buttons for windscreen wipers, lights, etc. The other is all that adorns the centre console (apart from a starter button). I have never used a touch-screen system that works so well or so intuitively. Everything from adjusting the wing mirrors, to opening the doors and boot (100 litres), to engine mapping, to music, to satnav, to phone, to air-con is controlled quickly and precisely from one screen. Not once did it show so much as a glimmer of a glitch during the whole day we used it either. It’s brilliant, and like everything else IFR Automotive patents, it weighs almost nothing. It even has Wi-Fi.

The mountain roads in Spain are some of the most technical in the world, with corner after corner snaking around rock faces. They’re smooth too, but the 740kg Aspid needn’t worry about bumps because it rides sublimely, no doubt helped by that minimal unsprung weight. The engine is from a Honda S2000 but with the addition of a Vortech supercharger. Power delivery is nicely linear, but the VTEC means you’ve still got to rev the hell out of the engine to get it to feel like it has anything close to the claimed 398bhp. The quoted 0-62mph time of 2.8sec seems like a computer generated dream. Nonetheless, there is arguably the world’s greatest manual gearbox to enjoy, and the wail at 9000rpm is glorious.

The Aspid has something of a dual personality, in that you could give it to an elderly aunt to drive and she would do so comfortably and serenely off-cam and never be in the least bit scared. Push it harder, however, and the Aspid can generate massive cornering forces. The Toyo Proxes R888 tyres give enormous grip, so traction is never an issue. The steering is a little light at first, but a press or two of the touch screen as we’re going along allows us to bleed off some of the assistance and resolve the issue!

Brake hard and the pedal working those twin discs is firm and positive, if a little short on progression at the end of its travel. Grip is only relinquished after what feels like a titanic struggle, and even then it gives up progressively and in a very balanced way front to rear. This prototype is perhaps a bit too soft in roll, but the car is fully adjustable, so IFR could tailor it to your own preferences – I’d stiffen it up to make it a touch more playful and accurate.

IFR has five firm orders for Aspids, and those cars are now in build. Upwards of £75,000 (the anticipated base price of the 266bhp non-supercharged car) is a lot of money for something that people will compare with (far cheaper) Caterhams, but the technology – and comfort – is on a different level. But why I really want to see it work is so that IFR can go on to fulfil its promise of building a car the size of a 911 that only weighs 850kg…