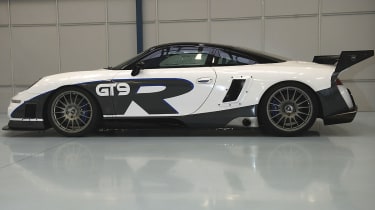 One question obliterated everything else when I first read about extreme Porsche modifier 9ff’s holy-crap mutant 911, the GT9. What was the point of a £435,000 hypercar, I asked myself, that had so much more power and torque than traction (987bhp and 711lb ft plays rear-wheel drive and no management electronics) that it would be creamed at the lights by a BMW M3?

The official claim may have been more favourable, but our own Roger Green failed to see the GT9 get from zero to 60mph any quicker than 5.2sec when he attached the timing gear to it on the Bruntingthorpe Proving Ground’s two-mile straight last year (evo 116). That might be good going for a souped-up Citroën Saxo, but it’s a tad embarrassing, surely, for something that looks like a cruise missile with wheels. And, to be honest, hardly the thrill of a lifetime. A supercharged Ariel Atom screaming to 60 in barely 3sec would deliver a vastly bigger hit, never mind the nail-the-throttle-and-feel-your-cheeks-ripple Bugatti Veyron.

The ton in 8.5sec, then? Better. Almost Porsche 997 Turbo quick. But the Atom would be there at least 1.5sec sooner, the Veyron a mocking 3sec. Ever been fired to 100mph in under six seconds? It’s one of the few automotive sensations deserving of the adjective ‘awesome’. The GT9’s time certainly isn’t hanging around, but it’s eminently survivable. So, here we are, nominally 30mph over the national speed limit, and still saying ‘show me something’.

Of course, that’s precisely when Green – a man so routinely exposed to massive horsepower, lookalike Kenneth Branagh is rumoured to have pinched his world-weary expression for his character Wallander – experienced acceleration so remarkable he still hasn’t quite got over it. Tyres hooked up, twin turbos poised to reveal the true meaning of ‘full boost’, and a handful of epic gears still to be engaged (fourth tops out at 186mph), the GT9 started to push on with acceleration so incredibly violent that Roger described it as ‘incomparable to anything this magazine has ever tested before’. Incredibly, the 9ff didn’t just haul back all of the gaping deficit lost to the phantom Veyron it was notionally racing, but it overtook it to post a 0‑200mph time of 24.04sec, a headlight ahead of the 24.2sec the Bugatti achieved with America’s Road & Track magazine at the Lemoore naval base in California the previous year.

A few months later, at the Papenburg test track in north-east Germany with 9ff founder and boss Jan Fatthauer behind the wheel, the GT9 hit 254mph, again shading the Veyron’s record (by a couple of mph). Amazing and, of course, quite fabulously irrelevant: a car that would get mugged by a geed-up Golf to 60mph, but which can accelerate between 100 and 200mph 2.5sec quicker than the ludicrously rapid and hitherto fastest car in the universe, the all-drive Bugatti, and then steadily, but oh-so slowly, pull away from it above 250mph.

Anyway, Veyron’s top-end vanquished, record book re-written, job well done 9ff. Or so you’d suppose. But no. I’m sitting in the evolution of that car, the perhaps predictably named GT9R. And it has 1120bhp, and Jan thinks it might just do 260mph, and there’s a bunch of cocky 1000bhp-plus Yanks to sort out, and, you know what, it’s just started to snow. My test drive on the roads around 9ff’s small but immaculate factory in Dortmund, I’m left in no doubt, is the subject of some concern, this being the only working prototype and the combination of glistening, slab-cold tarmac, 325/30 19-inch Michelin Pilot Sports and 774lb ft of torque being felt to be, by just about everyone concerned, dodgy.

Actually, this is really the same car that Roger drove at Bruntingthorpe but upgraded to ‘R’ spec, which, apart from anything else, makes it look more like a car, with its new front splitter and rear diffuser, and less like a dangerous bar of soap. Owners of the plain GT9 present or future can have the ‘R’ package (which also includes an uprated cooling arrangement and a side-outlet exhaust system) retro fitted, and, should they find it all a bit too extreme, removed again.

Can’t see this happening too often. 9ff caters to drivers who have difficulty understanding the word ‘enough’, particularly when it comes to power. At the factory during our visit are ‘his’ and ‘hers’ Cayennes belonging to a Russian couple, each toting 725bhp. (We use ‘hers’ as a chase car.) Parked outside is an ordinary-looking 911 with 1300bhp, owned by a man who likes to go drag racing. He reported back to the factory that the car was ‘virtually undriveable’ but had logged a 9.5sec standing quarter.

So strong is the GT9’s twin-turbo 4-litre flat-six, with its wholesale reinforcement, forged aluminium cylinder heads and titanium conrods, that boosting its specific power output to a more or less insane 280bhp/litre wasn’t a stretch. In fact it’s the same engine, further tweaked to 1300bhp, in the drag-loving 911. But thanks to the carbon body panels, the GT9R weighs just 1346kg, giving it a power-to-weight ratio of 845bhp/ton, or over 280bhp/ton more than a Veyron’s. According to Jan, the ‘R’ spec GT9 accelerates from rest to 300kph (186mph) in 15.7sec.

Perhaps wisely, it’s a short test drive – just out to the nearest stretch of autobahn, a couple of junctions, and back to base. We’ve been promised a proper banzai track session in the spring. As Roger discovered in the UK, the GT9 is a disarmingly easy thing to drive slowly – certainly no more demanding than a 911 GT3 – with a progressive, medium-weight clutch, easy gearchange and well-weighted, communicative steering. The engine is wonderfully tractable and the throttle has such a long travel there’s no danger of spooling up the enormous, water-cooled turbos unintentionally. Especially as they give such a loud and explicit commentary on their workload. Throttle movements are scored by a cacophony of bizarre air effects that occasionally transmute into what sounds like a bloke bashing a large cymbal in a performance of Stravinsky’s The Rite of Spring. Trust me on this.

The F1-style half steering wheel can be disconcerting too, given that it requires just under three turns between locks. For the first few miles I keep finding myself pawing fresh air. That said, the GT9R isn’t purely a straight-line phenomenon; it corners with stacks of grip, no perceptible body roll and, unsurprisingly given the absolute need for high-speed stability, a nudge of understeer.

We hit the autobahn crawling. Or at least that’s what it feels like – actually the traffic’s moving at a respectable 80mph lick, but it’s reluctant to get out the way. One foot-to-the-floor third- or fourth-gear surge and I’ll be happy. Perhaps the 9ff looks too much like a regular 911 in the mirrors of other cars? But then there it is: half a mile of clear air. Slot third, slowly ease down the accelerator, feel the turbos bite then begin to ramp up, then the noise, then the rear squirms, then the brakes. Really hard on the brakes.

For a few seconds, I’m not sure what’s happened. It’s as if the 9ff has collapsed the physics required to accelerate from 80 to 120mph. It just went there, elapsed time failing to register. I’m left with one thought. Where’s a Veyron when you need one?