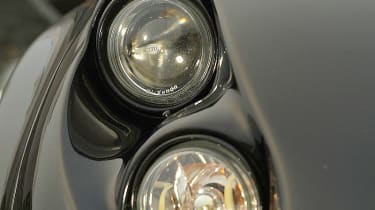 Apparently Gordon Gekko is making a comeback in a sequel to Wall Street. Unfortunately, it seems he isn’t the man he was. In a turnaround as dramatic as the world economy’s, greed is no longer good. Of course it isn’t. Pity, though, because my feeling is the previous Gekko’s vanity  would have compelled him to drive a deliberately different kind of German automotive statement in the shape of the shockingly schizophrenic Wiesmann GT MF5.

Why? Numerous reasons. One, looking like the love child of a gang bang involving a Jaguar XK120, an E-type racer, an Austin Healey 3000 and a Morgan AeroMax, it’s desperately cool. Two, it’s as expensive as it is conspicuous (the thick end of £200K, even with a modest take-up of the galaxy of bespoke finishing options on offer). And three, the Wiesmann badge is a plan view of the little lizard that Gordon’s surname is a misspelling of.

It’s an image so strongly associated with the brand and its complementary lifestyle accoutrements – clothes, luggage, watches, pens, etc – that the roof of Wiesmann’s stunning new factory on the outskirts of Dulmen, just north of Dortmund, is, well, a gigantic gecko. What the hell does a gecko have to do with an über-niche, BMW-powered sports car that draws its stylistic inspiration from classic British designs but is built in Germany? Geckos are grippy little suckers. So are Wiesmanns. No, that really is the official explanation.

Just one problem for Gordon. Wiesmann doesn’t sell cars in the US. It’s better news if you live in the UK, though, as the company recently announced that it is to start building right-hand-drive versions of its flagship V10-powered MF5, the car you can see here, as well as the V8 MF4 we sampled last year (evo 117). The timing might not be wonderful given the speed at which the UK’s economy is heading south, but I can reveal that the MF5 is. Completely.

Launched at 2007’s Frankfurt show, the MF5 uses the same all-alloy, naturally aspirated 5-litre V10 as the BMW M5 and M6. By any standards, it’s one of the world’s great motors. It has Bi-VANOS variable camshaft control and, in addition to that astonishing 500bhp at 7750rpm, some 383lb ft of torque at 6200rpm. Each cylinder gets its own electronically actuated throttle valve. Four oil pumps and two sumps ensure constant lubrication even during braking and cornering. It may not be a Formula 1 engine, but in contrast to the beautifully calculated antiquity of the MF5’s exterior, it might as well be.

Wiesmann claims 0-62mph in 3.9sec and a top speed of 193mph, which is serious enough performance to warrant the addition of an aggressive rear wing and diffuser to generate a little more gecko-like tenacity at speed. The MF5’s surface-sticking capabilities are further enhanced over the MF4’s by the more hunkered-down stance and dimensions: a 5cm suspension drop, wider front and rear tracks (by 10cm and 9.8cm respectively) and an 8cm stretch in length. The standard BBS alloys are 19in in diameter, but we can’t envisage many customers not going for the optional 20-inchers of our car, which, at some 11.5in wide at the rear, fill the MF5’s distended rear haunches to perfection.

The V10 is mounted low and behind the front axle line – the so-called ‘front mid-engined’ layout – and, as in the M5/M6, drive reaches the rear wheels via BMW’s 7-speed sequential paddle-shift transmission, complete with its shift-speed control and variable-lock differential. Despite the bulkier engine and transmission, the MF5 still qualifies as a lightweight. At 1380kg, it’s just 100kg heavier than the MF4 and therefore has a significantly better power-to-weight ratio: 368bhp/ton versus 287bhp/ton.

Everything about the MF5 seems to have been designed to give the driver maximum input and gratification. The cabin’s design is elegant and purposeful, and the new bucket seats provide rock-solid location. All the controls have a precise, hard-edged feel, and it’s an easy car to drive straight away, the BMW’s paddle-shift transmission, while not the smoothest you’ll encounter these days, at least not making a nuisance of itself. Crucially, the transmission isn’t a damper on excitement. On the contrary, not having to concentrate too hard on mastering the basics of driving the MF5 intensifies the thrill of its acceleration and the scalpel-sharp responses and tenacity of its chassis.

But there’s no getting away from the fact the core component of the MF5 is its engine. It’s the first thing you bond with, the last thing to fade from memory. Power isn’t the only issue. It’s the quality of interaction between driver and machine that gets under your skin. The multi-layered and savagely loud sonic presence of that M Power V10 is real edge-of-madness stuff. You can hear it all: ten cylinders, four camshafts, exhaust piping that would do justice to a church organ. It’s an intense, wailing wash of sound, the stadium rock of mechanical music. Wall to wall. Visceral. Intimidating.

Below 2000rpm the engine is smooth and tractable but essentially asleep, fine for burbling through drowsy villages. Peak torque happens at 6100rpm, and once past 6000rpm the motor hurtles towards its 8500rpm limiter delivering simply savage shove. Best of all, the next gear is only a matter of milliseconds away. And when you need to bring some sanity to proceedings, which will be much sooner than you expect, stopping power is every bit as impressive as you’d hope given the massive 374mm front, 370mm rear carbon-composite brakes.

Body motions are superbly controlled and damped, and grip for the most part is so high you can dial up faintly ludicrous cornering speeds without remotely approaching the limit. Push harder in tighter turns, though, and there’s a deliciously broad and adjustable band of behaviour that encourages and rewards commitment. But the MF5 doesn’t flatter. If you can’t wrap on opposite lock quickly and precisely, don’t go there. And although it’s very direct, the steering is so light (too light to be honest) there will be a moment of doubt.

That said, the Wiesmann feels fantastically nimble and is dynamite to hustle down a challenging road. But for all its dynamic resolve and acuity, it stays remarkably comfortable. The way it feels both sharp and supple is very classy. And, oh, that masterpiece of an engine. Perhaps for the first time, it can be experienced ‘in the raw’. Who can resist that?