Battery-powered mini looks to the future 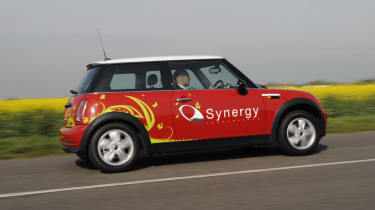 Electric cars are the future. Discuss. The case can be argued either way until you’re blue in the face, but thanks to our political masters it looks like they’re coming anyway. So let’s embrace them, nurture them and hope that, in time, talented engineers find ways to have as much fun with amps and volts as they have with cylinders and valves.

Take the Synergy E-drive. We’ve been keeping an eye on it for a while now because it promised to be one of the first electric cars with in-wheel motors. But development is taking longer than expected, so James Westcott and his team have reverted to ‘conventional’ electric motors and battery packs.

The E-drive is desperately simple to operate – a rocker switch sits where the gearlever was; press it forwards for forwards, back to go back – and it works, too. There’s a faint whirr at start up, but acceleration is brisk enough and the batteries regenerate as you brake, although with 180kg of them in the boot the car does drag its arse around corners. The E-drive doesn’t thrill in the manner we’re used to, but it’s a start.