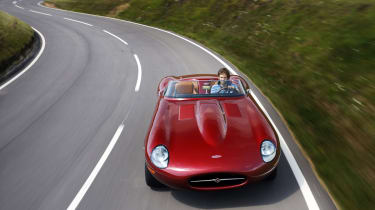 A beautiful anachronism, that’s what this is. The car, the moment, just perfect. Perfect except for historical accuracy. A Lancaster bomber is banking hard left overhead having just emerged from behind the white cliffs of Beachy Head. The heavy four-engined drone fills the air and you can imagine the chaps from the RAF’s forward listening station shielding their eyes against the sun as they watch the leviathan returning home. This could be 1943.

Except it couldn’t because I’m driving an E-type and that wasn’t produced for another 20 years. And yet, somehow, it still feels right. Two masterpieces of British engineering from a bygone era, one swooping down the road, the other soaring overhead. Automotive engineering always seems to have been lagging behind the progress of aviation, so in some ways the Lanc and the E-type have a sort of technological parity that the chronologically truthful pairings of Lanc and MG TA (or Vulcan and E-type) don’t. The only trouble is, of course, that I now have to admit that the engineering beneath the skin of this particular E-type – and indeed the skin itself – isn’t from the ’60s. It seems hard to believe, but this shape, these beautiful lines, didn’t see light of day until just a few months ago.

This is the Jaguar E-type Speedster, created by Eagle. It’s based on one of the company’s E-type Sport models, which bring the legend discreetly and faithfully up to date. Martin Brundle owns an Eagle E-type and drove out to Spa in it with David Coulthard. These cars aren’t replicas and you won’t find any American V8s crated in and stuffed under the bonnets. Instead Eagle takes an original 4.2 straight-six and bores it out to 4.7 litres to produce the required power and torque, thereby retaining the essential character and soul of the original. (If you want to modernise further still, then they will do you a significantly lighter all-aluminium straight-six made in the exact image of the XK original.)

The suspension and braking are similarly brought up to scratch, reflecting the increased capabilities of modern tyres. At the end of the process what they present you with is the sort of E-type that you would hope would roll out of Jaguar’s workshops if they were still producing the car today. It’s a bit like what a modern Caterham Seven is to the Lotus original, although I think both Caterham and Jaguar would wilt if they saw the sheer fastidiousness of an Eagle.

But what’s underneath couldn’t have mattered less when I first clapped eyes on the Speedster this morning. The utterly gorgeous shape is by Eagle’s Paul Brace, who went to work after a customer from Connecticut said that he wanted ‘something a bit special’ and wasn’t concerned about time or cost.

Now, the E-type is one of the best looking cars of all time and meddling with it would seem brave verging on foolish, but to my eyes the Speedster looks even better than the original. You get the feeling that this is how Malcolm Sayer (the legendary designer of the C- D- and E-types) might have dreamt the car could look, like a flowing pencil sketch come to life…

The tail is kicked up slightly and the arches ever so slightly swollen over the wider wheels and track. Although it looks almost impossibly sleek, the floorpan and sills are actually slightly lower, adding a fraction more muscle to the profile. The flush fittings and lack of seams in the aluminium body lend it a wonderfully uncluttered simplicity, while details like the bespoke three-ear spinners on the wire wheels give it an air of exquisite quality. And topping it all off is the shallow, raked-back screen, wrapping around the cockpit and giving the impression that here is an E-type that really could slip through the air at 150mph as the original claimed.

Press the silver button in the handle and swing the tiny door open, step over the high sill and slot your legs beneath the thin-rimmed wheel. In the centre of the three spokes is a specially commissioned enamel badge with the famous Jaguar snarling just a little more than usual and the word ‘Speedster’ underneath. The lovely Smiths dials are retained, as are the toggle switches and the delicate wand-like indicator stalk. Turn the key in the middle of the dotted aluminium centre console one click right and then press the small black button. The starter motor turns the engine over for a moment or two before the straight-six catches and the deep burble erupts from the exhausts with a genuine brrrummm as you blip the throttle. The five-speed ’box that Eagle uses is fantastic, and immensely satisfying as you palm the polished silver ball and feel each gear slot home. It’s the same sense of metal meshing you get when you turn a key in a lock but oilier, smoother and bigger.

With 360lb ft to push along less than 1100kg there’s not much of a chance of stalling as you ease off the line. The steering’s heavy, accentuated by the smaller than standard Nardi steering wheel, and you can feel it in your forearms as you grip tightly to turn it, but it does give you a sense of security about what the front wheels are doing all the way out at the end of that long bonnet. Later on I’ll discover that most of the time you don’t really need much lock anyway.

The rear bodywork extends forward to hug the two seats and this, combined with the 1.5inch lower floorpan, means that you feel well and truly ensconced in the cabin, despite the low screen. The ride is firm but not uncomfortable as we wind our way through the bumpy Sussex lanes, hedgerows and trees flashing past as we head towards the coast. It feels invigorating being bombarded by fresh air – the screen’s effective enough that you don’t need a helmet or even goggles – and if you’re prepared to daydream just a little then there’s a definite sense of adventure to driving the Speedster.

After a while we break onto more open roads and squeezing the throttle wide reveals pace worthy of the car’s name, easily enough to outrun a modern hot hatch. You don’t really need to rev much beyond 4000rpm, which might sound pathetic but feels like plenty and you certainly pile on enough speed to keep the big AP Racing discs occupied. There’s nothing fragile about the performance either – it feels like you could happily catch a ferry across the Channel on a whim and then blat across Europe as they used to do with C-types on their way to the Mille Miglia or Le Mans. And no need for a riding mechanic.

Blasting through a series of bends up on Beachy Head, you learn to merely nudge the nose into the faster turns with that beefy steering before opening the throttle to drive through the corner from the rear. Interestingly, despite the increased grip and security of the updated suspension and modern Pirelli P6000s, it’s the same balance and flowing technique you’d employ if the E-type were on skinny crossply tyres. At slow speeds around roundabouts the Speedster doesn’t feel entirely at home (rightly so as roundabouts were only just starting to spread in the early 1960s) but with more speed and less radius the Jaguar feels in its element. You can understand why Goodwood’s fast corners are the perfect stage for historic racing. It’s just then, just as I’m starting to really bond with the Speedster, that the three distinctive silhouettes that make up the Battle of Britain Memorial Flight appear in the bright swimming-pool-blue sky overhead. As the Merlin engines mingle with the Jaguar’s, life seems slightly surreal but very wonderful. The Speedster is top-end supercar money and some people might question why you’d want to buy something for supercar money that, for all its updating, creates a driving experience that is unmistakably classic in spirit. The best answer I can give, I suppose, is that it’s the same reason that many people would rather own a Spitfire than a Eurofighter.