Will Germany's newest, production-ready sports coupe live up to its early promise? 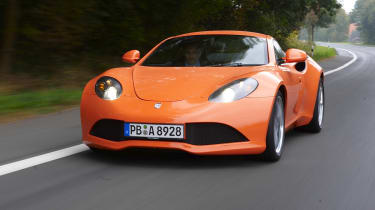 Some days it’s easier to shake off an early start than others. This is an easy day, I reflect, as the striking glass frontage of an immaculate modern factory looms out of nowhere on the outskirts of an unremarkable German town. The car that’s built here has appeared on the sports car scene with a similar delightful abruptness, fully formed and immaculately finished. It’s the Artega GT, and an example sits out front, small, curvy and confident in salmon pink. It looks great. The fatigue of that 4.30am start melts away to nothing.  A year ago David Vivian came here, to Delbrück in northern Germany, to drive an early prototype of the GT (evo 122), and now, on the eve of its release in right-hand drive, I’m here to try the finished item. To recap, this compact coupe is a mid-engined two-seater built around an aluminium tub, cloaked in a plastic body and powered by an off-the-shelf transverse V6. Sound familiar? That pretty much describes the new Lotus Evora too. However, the Artega’s extruded aluminium tub is welded rather than bonded, its body is moulded in carbonfibre reinforced polyurethane (an innovative material that will also be used for the body of the new McLaren MP4-12C) and its V6 is the narrow-angle 3.6-litre VR6 unit from the VW Passat R36.

Vivian reported that the Artega had satisfying dynamics, writing that it ‘drives with the kind of accuracy, fluency and intimacy it’s rare to experience at any price’. The launch of the Evora was still more than half a year away then, but it’s a description that could apply equally to the Lotus. However, not long after you take the wheel, you appreciate that the Artega gets there by a different route.

Parked in front of the factory, the GT looks like a hunkier Exige or maybe Dino; low and short but wide and deep-shouldered, and riding on shiny, big-diameter, deep-dish forged alloys hooded by appropriately fat arches. The nose is perhaps a tad bland, a touch Mitsubishi FTO-ish, but overall it looks a bit handy, like it packs a punch.

Drop into the Recaro seat, push the fat key fob into the slot, hold it there and the V6 fires up with a throatiness befitting its 3.6-litre capacity. It idles with a relaxed beat that’s not quite straight-six and not quite V6, which is kind of what you’d expect given that the angle between the banks of this (very) narrow-angle vee engine is just 10.6 degrees.

The cabin is simply styled and, for the driver, dominated by the combined speedo and rev-counter, which sits centrally in the instrument cluster and looks appealingly like a large chronograph. Either side are flat-screen representations of minor gauges, a number of which can be called up. Stroke the auto-style gearlever back into D, squeeze the throttle and you’re away. The fact that there is no manual gearbox option may frustrate some potential buyers, but there’s no easy way around it. The Passat R36 engine ticks lots of boxes in terms of availability, packaging and performance, but it comes solely with Volkswagen’s six-speed DSG twin-clutch ’box. So you only get two pedals and are denied an important layer of sports car interaction.

Support from VW comes from the highest level and there are many VAG components seamlessly integrated, some visible, like the pedals, stalks and air vents, others not. Yet the Artega is very much its own thing and soon beguiles you with a delicious sense of being homogenous and honed. From the off there’s a satisfying consistency about it; lightly worked, the engine has a deep, heavy, languid note and the throttle, brake and steering share a similarly weighty, considered feel. To this you can add the grounded positivity of the front end and the remarkably supple, balanced feel of the ride – the Artega tackles one particular difficult, bumpy road better than the 5-series taxi that brought us this way earlier.

Yet this sense of mass is a deception because the Artega isn’t heavy at all, weighing just 1116kg. ‘Performance through lightness’ may be a Lotus mantra but Artega is the better exponent. Sure, the Evora is a 2+2 design but it’s still surprising that it is some 260kg heavier. In terms of fixtures and fittings there’s nothing missing from the Artega’s checklist: it’s a refined, comfortable coupe that comes with air-conditioning, multiple airbags and all the other trappings you’d expect at this level.

That lack of weight becomes apparent when you pick up the pace. Jab at the slim rim of the Artega’s steering wheel and the car jinks immediately, yet remains calm and composed. Drop the throttle to the carpet and you get an even better demonstration of lack of inertia. There’s a neck-straining urgency to the delivery that makes good on the promise made by the looks and the crooning, heavyweight six-cylinder rumble at idle. There’s strength and depth to the shove, and the DSG gearbox turns it into a seamless outpouring for as long as you pin the throttle.

The ’box, like the engine, is fine-tuned for the Artega, and comes with wheel-mounted paddles. There’s a ‘Sport’ mode that’s still automatic but brilliantly second-guesses what gear you want to feel going home as you brake into tight corners, and a full manual mode if you’d rather work it out for yourself. The shifts do perhaps lack a bit of urgency when you’re really going for it, and there’s an overrun whine from somewhere that makes it sound lazier still, but throughout it all the shifts are smoothly executed.

The feel and detail provided by the steering is impressive considering that the assistance comes from an electric motor. In a tight, damp turn you can guess where the limit of front grip is and drive up to it, and then on the exit do the same with the rear with the throttle. Just when you reckon the rear should start moving wide, the hidden-till-lit ESP warning light starts blinking to the right of the speedo. It’s very subtle, very flattering.

There will be a three-stage ESP system on customer cars, but to Artega’s frustration it is still going through the sign-off process inside the supplier. On this car ESP is either on or off, and when we finally find a clear, tight bend it seems right to turn it off. In second gear, a stab of throttle unsticks the fat rear Michelins quite easily, and then, unexpectedly, the tail keeps swinging, requiring a bit more lock to catch. This is the only time the weight distribution betrays its tail-heavy 42.5:57.5 front:rear balance; it’s so wonderfully poised and calm in every other scenario. Take the corner in third instead and the Artega accelerates pretty much just as hard out of the turn and there’s no hint of the tail wanting to get out of line.

A year ago the estimated UK price of the Artega GT was around £65K, which would make it a serious competitor for the Lotus Evora. However, the euro/£ exchange rate now means that the Artega will cost nearer £80K when it arrives in right-hand-drive form next spring. There’s no question that the Artega is a rare, very high quality product and an absorbing drive, but is it more desirable than an Evora or even a 911? We might have the answer next month…