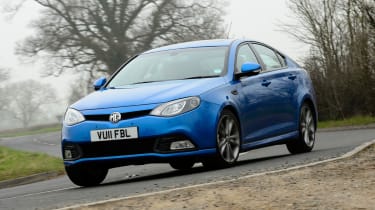 What is it? The return of the MG badge, the MG6 is a roomy hatchback powered by a 158bhp, turbocharged development of the old 1.8-litre K-series engine. Painted and trimmed bodies arrive from Shanghai, along with crates containing engines and gearboxes. The whole lot is assembled at Longbridge.  Technical highlights Under the five-door body is an entirely new platform which owes nothing to recent Rovers. The rear suspension is a clever three-link design functioning as a semi-trailing arm but without the unwelcome camber changes. Inside, there's quite a sophisticated trip computer and info screen. But with prices starting at £15,495, don't expect the re-stating of any art. What's it like to drive? Sit in the MG6, and you have to bin all notions of conventional design subtlety and premium-class signifiers. It's a curious cabin but not without appeal, once you've assimilated the aesthetic. There's a giant padded hood over two incongruously small dials, and a slab of hard plastic set prominently above the glovebox. Yet the windscreen pillars are fabric-covered and the top-spec test car has leather seats and a carbonfibre-ish finish on the centre tunnel. Fit and finish are fair but this is clearly a cheap car to make. A lot can be forgiven when you drive the MG6. It steers (using hydraulic assistance) with delightful feel, weight, precision and transparency, and the mix of supple springs, taut damping and progressive cornering-attitude adjustability on the throttle makes the MG6 an unusually deft, light-footed and intimate driving companion. Dynamically it's one of the best cars in its class; the engineering chief drives a Lotus Exige, and it shows. The engine isn't so good, sometimes feeling keen but other times a bit flat under load as though the management is retarding the timing. The gearchange could be more precise, too. However, the driving position is fine and the leather-rim steering wheel is good to hold. How does it compare? Bigger than a Focus, smaller than a Mondeo… it's the size 'upper medium' cars used to be, and to be commended for that. The MG6 won't worry premium rivals on their terms, but as a roomy driving machine at a decent price it makes a surprisingly strong case for itself.  Anything else I need to know? The factory is ramping production up now, and sales start on April 7. The top TSE model, with 18in wheels, costs £18,995, and a four-door saloon will follow along with that diesel.