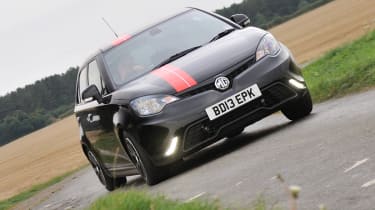 The new MG3. It’s a budget-price supermini designed to extend the reborn MG brand’s appeal far beyond the less than brilliant MG6. It’s generic Far Eastern supermini in design: you’d probably think it was a Kia or Hyundai from a distance.

Prices start at £8399 for an entry-level ‘3 Time’, with standard LED running lights, stability control and all-round electric windows, while ‘3 Form’ (£9299) adds Bluetooth, air con and a DAB digital radio, with ‘3 Form Sport’ adding 16in alloy wheels for £250. Top spec ‘3 Style’ – tested here – gets parking sensors, automatic lights and wipers and cruise control, and sneaks in £1 below a five-figure price at £9999.

Power comes from a 1.5-litre four-cylinder petrol engine producing 104bhp, delivering a claimed 0-60 time of 10.4sec and a 108mph top speed. It’s no rocket ship, but it is noticeably quicker than all its sub-£10,000 rivals. Indeed, for the younger buyers MG is targeting, there’s an unarguable appeal in the combination of low price, warmish pace and an insurance grouping of four. Could this be a Citroen Saxo VTR for the new generation? Without the turbocharging of some rivals, fuel economy and CO2 emissions are average, with respective 48.6mpg and 136g/km claims.

Let’s not get carried away. The MG3’s engine is gutless at anything but full thrash, and it’s loud and coarse when revved. The gearing is relatively tall – there are only five speeds – and the anaemic bottom end means it tends to bog down when you change up. There’s lots of wind and road noise at cruising speeds, too.

But the chassis shows promise. Although built in China, the MG3 was largely developed by a UK-based engineering team, and British cars have been further tweaked to account for our dreadful tarmac. The chassis is on the firm side, but the dampers keep everything in check and body roll is well contained given the car’s relatively narrow track. The steering is good, too, with old-fashioned hydraulic assistance combining nice weight with decent feel. It’s far better than the feedback through the cheap electric systems fitted to rivals.

The grip generated by the 195-section Goodyear EfficientGrip tyres is modest and the front washes wide if you push too hard. But at less than max attack there’s a decent dynamic balance, the Three tightening its line predictably if you lift off mid-corner. Behind an over-light pedal the brakes have reasonable bite, despite using drums at the rear.

On price terms, very well. The sharpest and most fun superminis– the Suzuki Swift and Ford Fiesta – are several thousand pounds pricier with equivalent spec and performance, though lightly used examples predictably compete on a much more level playing field with a showroom-shiny MG3.

It’s well priced, although depreciation will likely be fairly brutal. It’s a simple, unpretentious little performance car, and if that doesn’t earn it the right to wear an MG badge, I don’t know what does.