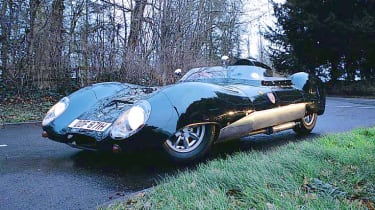 It's 23 years since Westfield first opened for business building the XI, and even back then it wasn't exactly at the cutting edge of technology, being a replica of the 1956 Lotus XI. But now the XI is back, reintroduced in authentic 65bhp, four-speed gearbox, old-fashioned sports car guise. Just to prove the point, Westfield delivered the car to us complete with a pair of period goggles. In the mid '50s the sleek Lotus, powered by a Coventry Climax engine, was the car to have if you wanted to win and it became Westfield's first ever replica kit in 1982. Founder Chris Smith's aim, with his then fledgling company, was not only to ape the beautiful streamlined styling but to provide drivers with the same period feel from behind the large, thin-rimmed steering wheel. And now, due to a constant stream of requests to bring it back, they have. So, unlike Caterham, which has continually developed and modernised another Colin Chapman masterpiece, the Westfield XI is exactly the same underneath as it would have been if you bought it all those years ago. Which means the donor cars are now classed as classics themselves, being either 1275cc MG Midgets or Austin Healey Sprites. The price of the kit is £8950 to which you will have to add the cost of sourcing a motor and gearbox and various other vital ingredients, such as wheels, a rear axle, front uprights and a steering rack. Of course, Westfield can do it all for you if you prefer, but a fully built car by Jim Bickley using reconditioned parts will cost £17,750. If your pockets are deeper, he'll do you one using all new parts. As we arrived at our rendezvous point we caught our first glimpse of the XI. Tucked away from the persistent drizzle under the overhang of one of the vast Bedford Autodrome hangars, it looked fabulous, just sitting there oozing nostalgia. Its tiny, yet perfectly proportioned curvy surfaces have a purity and a lightweight, almost fragile form that epitomises '50s design. You could buy one for the looks alone. If you want to drive, however, you unlatch the diminutive, sill-hinged door and allow it fall towards you before rather awkwardly clambering into the sparingly padded seat. The slightly recumbent driving position is very comfortable and the pedals, wheel and gearlever are perfectly located. The BMC A-series engine wakes with a little hesitation and soon settles into a burbling idle, thanks to a very cool side-mounted exhaust. That four-speed 'box has no synchromesh on first gear but it slices between the cogs sweetly enough and as we head onto the damp track the aged motor rasps enthusiastically. Weighing in at just 498kg, the XI is able to put every one of those 65 horses to good use, but there's no hiding from the fact that on the wide expanse of a racetrack, it still feels slow. The Lotus may have been a race winner 49 years ago, but this is not a trackday toy for the new millennium; we're on a circuit only for the purposes of photography and on-limit handling. Westfield has quite rightly chosen tyres that provide an appropriate grip level and fitted the same Avon CR322s used by race novices in the Caterham Academy. On the slippery surface it is possible to spin the inside rear wheel, but to drift like they did in the days of black and white photos you need to set the car up on the entry of the corner by inducing a little lift-off oversteer, then balancing the car on the throttle and riding out the resulting slide. If this sounds difficult, it isn't - everything happens at what seems like half-speed and it's utterly predictable. The most complicated part is picking your braking point, as the Midget stoppers take twice as long to slow your momentum as modern-day anchors would, but it all adds to the charm. And that charm grows the minute we take the car out onto the road and hustle it down a series of typical B-roads. Even in the middle of winter it feels like we are in the middle of a clich�d classic motoring scene and I have to admit I thoroughly enjoyed it. The suspension, with independent front wishbones and rear trailing arms, copes with the bumps and undulations with the kind of aplomb only a lightweight car can achieve, and between the trees and hedgerows it feels nippy enough to give a warm hatch a good run for its money. On one of those rare warm English summer evenings it would be a very special place to be.