This final fling for the R34 Skyline is a roadgoing racer, and we love 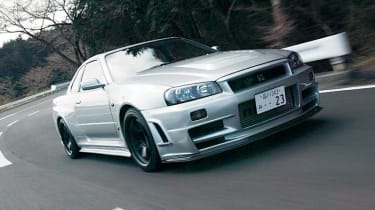 Nissan never expected the Skyline GT-R to become the legend that it has. Back in 1989 when the first R32 model surfaced, the company had just one aim: to win races in Japan's Touring Car Championships. But when it started monopolising the podium, the unexpected happened: the coupe, on which the race car was heavily based, started to sell.

Nissan never really planned to make a whole lot of GT-Rs, and never planned to export the car either, reasoning that the GT-R's race-bred chassis, twin-turbocharged engine and phenomenal four-wheel drive handling would only ever find a cult audience at home. Well, it didn't really work out like that either.

Nissan had hit upon a hi-tech package that the whole world wanted to know about and pretty soon private exports started arriving in places as far away as the UK, Australia and the US. But while everyone who tested the car raved about its superb chassis and cornering potential, few were satisfied with the grunt under the bonnet. As US and European cars were pushing through 300bhp and then 400bhp by the late '90s, the road-going GT-R stayed at a self-regulated 280bhp. And it wasn't just the modest power output that had pundits raising their eyebrows. Because they all knew that this race-honed chassis could be tweaked to take a lot more horsepower which, of course, is what the tuning fraternity has been doing virtually ever since the chisel-faced coupe's launch.

Now, more than 18 months after Nissan officially canned production of the R34 GT-R, the lads at Nismo, the company's racing arm, have resurrected the R34 for a last, power-crazed fling. And the result is mind-boggling. This is the GT-R that Nissan should have made in the first place, and the perfect limited-edition model to whet the appetites of potential buyers for the next-generation GT-R, due in late 2007.

Just launched in Japan, the hand-built limited-edition R34 GT-R Z-tune packs a fully reworked 500bhp engine, race-spec suspension and brakes, and costs around £90,000. But what really impressed at this early drive in the mountains just south of Tokyo was the development aim of Nismo's engineers: to build a GT-R specifically designed for 30-minute track sessions. That's right, these corporate petrolheads spent two years developing the ultimate Skyline GT-R to be driven flat-out for half an hour and not bat an eyelid.

To achieve that, Nismo leaned heavily on 15 years of racing experience going right back to the R32 but taking its main inspiration from last year's Japanese GT Championship (JGTC) GT-R GT500 race car. With no new cars available to convert, the team had to find pre-owned GT-Rs. Nismo project team staffer Kojun Iwata said: 'We went through dozens of GT-Rs looking for cars with no body damage and less than 30,000km on the clock.' The cars were then stripped down to the bodyshell and transformed into road-going racers.

The results are breathtaking. This is a car that shouts its singularity of purpose: the Z-tune's lightweight aeroparts, for example, serve purely to maximise cooling efficiency to the engine bay and brakes. And the car's beefy-sounding exhaust is tuned to undercut noise decibel levels by the most slender of margins.

Acceleration mirrors that of a GT-R GT500 race car. The stock twin-turbo 2.6-litre straight-six has been bored out to 2.8 litres and is packed with race engine internals borrowed from the GT500, including a pair of heavy- duty race-spec IHI turbos. It pumps out 500bhp at 6800rpm and 398lb ft at 5200rpm; Iwata said he could easily tweak the car to a maximum of 630bhp but then they'd have to worry about emissions regulations. Torque comes on strong from 2000rpm, explodes from 3500-4200rpm and stays on tap all the way to 7000rpm. Keep it hovering around 4000rpm and the Z-tune makes you feel as though nothing could get past you.

It's a very physical experience. Drop the clutch at 5500rpm and you are battling nearly 1.5g as the Atessa-Pro four-wheel-drive system fights to retain grip. Jump on the perfectly balanced six-piston monoblock Brembo brakes with 365mm rotors up front, and you'd better be ready for nearly 2g of deceleration as the Bridgestone Potenza RE-01Rs chirp and struggle to absorb the forces. To be honest, while these tyres are widely accepted in Japan as some of the best high performance and club racing rubber available, the phenomenal braking power finds them wanting. For ultimate grip you'd need to switch to Bridgestone's latest racing rubber, the Potenza RE55S semi-slicks. (Depending on where you wish to drive your Z-tune, you can have it delivered wearing either the road-biased tyres or the track-ready semi-slicks, both of which are wrapped around 18in LM GT4 GT500 rims made by Rays.) Whatever tyre choice you make, you don't have to be Schumacher to realise that these brakes are extraordinary and won't fade even under constant punishment. Nismo has done a superb job.

The steering is pin-prick sharp and ideally weighted for such a car. Throw a regular R34 into a corner and you need to be prepared for kickback through the steering as the square-shouldered RE-01R tyres turn in and search for the biggest footprint. But Iwata and his team have tuned the suspension and camber settings in such a way that the Z-tune's turn-in is absolutely progressive without the slightest hint that these Potenzas employ such beefy shoulders.

No matter what you do in this car, your brain has to recalibrate its understanding of the laws of physics when it comes to cornering; nothing prepares you for the phenomenal grip this coupe generates. Even such cliches as 'it redefines cornering' seem inappropriate. On public roads, you run out of balls before you run out of roadholding.

For a car so highly tuned, it's pleasantly surprising that the Super Coppermix twin-plate clutch is almost as light as a stock clutch, providing smooth gearchanges through the six-speed Getrag 'box. The beefier low-down torque permits instant acceleration in any gear and makes pottering around town far less stressful than in the regular R34, even in sixth at 2000rpm. More evidence that the Z-tune is set up for flat-out abuse at track sessions, there are twin oil-coolers for the transmission and diff.

Along with its reinforced chassis, this GT-R also gets specially tuned, race-spec Sachs three-way adjustable dampers, costing £10,000 a set. They deliver a ride quality unheard of in a car this hardcore.

Inside, the leather and Alcantara-covered seats are comfortable but could do with more side support for quick cornering. A specially fitted 320kph (199mph) speedo and titanium gearknob hint at what the Z-tune is capable of on the track.

So, just when we all thought that the R34 was dead and buried, it's been pulled snorting and snarling from the grave to deliver the mother and father of all swansongs. And thanks to the glorious eccentricity of the Japanese, it has been turned into a track star with both attitude and extreme ability. It's just a shame only 20 will be built. If Nissan wanted to build up the Skyline's enthusiast credentials prior to the 2007 launch of the all-new GT-R - expected to house a 480bhp+, twin-turbo, 3.2-litre V6 - it has succeeded in magnificent style.