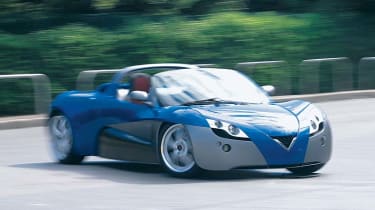 Venturi may be known to evo readers as the manufacturer of elegant coupes vaguely resembling the Lotus Esprit (but better built), or perhaps for periodically going bankrupt. Monegasque entrepreneur Gildo Pastor is the French manufacturer's sixth owner. The two-seater Fetish is the first of a planned range of models. The original Fetish, shown at the 2002 Paris motor show, had a Renault petrol engine and was effectively an enlarged (though still small), uprated, rebodied Renault Spider. Then Pastor decided not to compete with Lotus and TVR (he also lacked the resources to take on Ferrari and Porsche). Instead, here is the world's first electric high-performance car. The planned production run is only 25 cars, the price a stinging 540,000Euro (around £370,000). Venturi's small engineering team is led by Gerard Ducarouge, of Grand Prix and Le Mans fame, and styling is by Sacha Lakic, previously known mainly for funky motorbikes. Under carbonfibre panels, with scissor-action doors, the chassis is carbon/aluminium honeycomb, with front and rear sections in extruded aluminium, front suspension by wishbones and a multi-link rear design. One hundred lithium ion batteries, each with 72 cells, are mounted in a T-shape running forward under the central tunnel. These account for one third of the 1099kg weight, and they generate considerable heat; cooling has been Ducarouge's biggest challenge. At present they are air-cooled, but water will probably be used in production. The electric motor, driving the rear wheels via a reduction gear, spins up to 14,000rpm and develops 241bhp. While the torque figure of 162lb ft may seem unexceptional, the crucial point about electric motors is that they deliver that instantly, the moment the throttle pedal is crunched. You start the Fetish by turning a key and pressing a button. Then, weirdly, nothing happens - no sound or vibration - until you do the pedal-crunching. Damp roads caused the electronic traction control (essential with that instant torque delivery) to activate frequently early in my drive. This merely inhibits performance slightly rather than being noticeable as excessive interference. On dry surfaces, performance is dramatic, even if the car I drove was apparently slightly down on power. Venturi claims 0-62mph acceleration in 4.5 seconds, so the Fetish could embarrass supercars at trackdays, provided the straights are not too long: top speed is limited to 106mph (this could be adjusted slightly). The steering is pin-sharp, though its assistance behaved erratically during my test, making low-speed manoeuvres a chore. But the chassis feels nicely sorted, with good balance and minimal roll. Surprisingly, considering the huge wheels (18in front, 19in rear) and sprayed-on Michelins, the ride quality is remarkably acceptable. The development car I drove had rumbly, grabby brakes, but with twin front discs and huge callipers, stopping power is up to the grunt, though of course there is no grunt, merely a distinctive whirring. Deceleration induces strong engine braking, which usefully regenerates energy, to some extent. Actually, the claimed range is impressive: the official figure is 200 miles, but Gildo Pastor is confident that 300 should be easily attainable. A full battery recharge at 80 Amps takes 3.5 hours and 16.5 hours at 18 Amps. Of course, the noise, or relative lack of it, is the weirdest thing in this car. At full 'throttle', the whirr of the motor is like a muted gas turbine. Also, you hear tyre noises that are drowned out by exhaust and mechanical sounds in conventional cars, and a bizarre background tinkling caused by the floating discs, which will not be retained in production. Venturi has much to do before the finalised Fetish is unveiled at next year's Paris show. Several details, apart from those mentioned, will change. Customers will take delivery over the following two years. The Fetish, showcase for Venturi's engineering expertise, is merely the first product of Gildo Pastor's ambitious plans. Of interest to evo readers will be a GT3 car, due later this year.