If you think the looks are mad, wait till you see the price 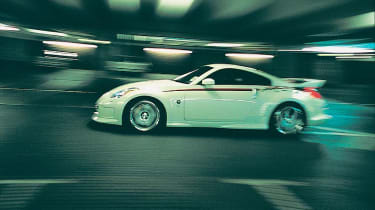 When the Japanese decide to go to town on something, they really go at it. Witness Nismo's magnificently over-the-top efforts with this, the 350Z S-Tune GT. Built to commemorate the twentieth year of Nissan's illustrious motorsport division, and to celebrate its latest product - the Fairlady (350Z) GT500 touring car - winning the spectacular Japanese touring car championship, the 350Z S-Tune GT is a gob-smacking machine. Covered from stem to stern in aerodynamic addenda, including a fantastically elongated droop nose, extended tail and razor wings that mimic the GT500-class racer, the S-Tune is a crazy amalgam of weapon-like race-bred aggression and aftermarket high kitsch. Whatever your take, it's certainly arresting. Even my postman, a man not given to commenting on the ever-changing but perennially exotic kerbside adornment outside Meaden Towers, felt compelled to utter a primeval phwoaarghh on clocking the S-Tune. Me? I love it, especially the one-piece forged Rays Engineering alloy wheels, which look mouth-watering and cost an absolute fortune. Wearing Bridgestone S-03 Pole Position tyres (245/35 front, 275/35 rear) and sitting 20mm closer to the tarmac, the S-Tune's chassis has been lowered and stiffened with the fitment of G-ATTACK springs and dampers (don't you just love Japanese acronyms?) and promises significant dynamic gains over the standard 350Z. Inside, the S-Tune benefits from a pair of extremely supportive race-style seats, complete with Nismo logos. The 3.5-litre V6 gets high-lift camshafts, new valve-timing control unit, tougher con-rod bolts, reinforced valve springs, lightweight flywheel, new induction system, re-mapped ECU, sports catalyst, and a carbon air duct. All designed to get the engine revving harder and faster. Given the effort Nismo has gone to, the 20bhp power gain is modest to say the least, but the character of the engine has changed considerably. It's less easy-going than the standard 350Z unit, requiring more revs to hits its stride, but once up there it pulls harder and responds more keenly. If you like the lazier demeanour of the standard Zed, the S-Tune will feel like hard work, but if you like the old-school kick of a VTEC Honda, Nismo has given the coupe some added edge. As a welcome bonus, the soundtrack is superb. As evocative as Le Mans at night, the S-Tune emits a real guttural bellow that builds in volume and pitch as the revs climb to the 7200rpm limiter. Magic. Perhaps the biggest and most successful transformation is the chassis, which as well as gaining significant grip and traction, thanks to those monster Bridgestones, also feels more taut, precise and connected to the road than the standard 350Z, with none of the mild lateral give encountered during hard cornering. And, while the ride is harder, the G-ATTACK set-up preserves enough pliancy to let the S-Tune work on British B-roads. The brakes have also been improved, with enormous 355mm front discs clamped by four-piston Brembo callipers and high-performance pads. The standard 350Z has excellent Brembo stoppers, so they have a tough act to follow, but the firm pedal and strong bite, even with light pedal pressure, gives you all the confidence in the world. We weren't able to test them on track, but all indications are that they'd be just as impressive. Undoubtedly some of you will despise the S-Tune on its looks alone. Equally, others will adore its unashamed visual excess. Loathe it or love it, what's beyond argument is that the S-Tune is a totally authentic taste of Japanese tuning. Built in tiny numbers with obsessive attention to detail and using the finest quality components, the S-Tune appeals to the fetishistic streak in all of us. Ultimately you either 'get' the S-Tune or you don't, but if you've ever played Gran Turismo, Nismo's take on the 350Z will rightly have you in raptures.