Our Westfield's gearbox had been whining with great character. Then it jammed... 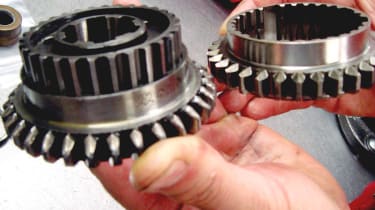 I’d coasted the last thirty yards or so down our quiet village lane. It was three in the morning, I’d just driven the 450-odd miles back from the Le Mans Classic (095), I was knackered, and the last thing I wanted to do was wake our two dogs from their slumbers. The Westy free-wheeled onto the driveway and crunched to a halt. I clambered out, fastened the tonneau cover and crept into the house. The hounds from hell slept on.

I slept well, too. The car we’d built had covered just over a thousand miles in three days, it had already repaid all the long hours of work with some priceless memories, and apart from throwing a fan belt it was running like a dream. Or so I thought.

Next morning I jumped in to drive to the office, but something wasn’t right. The gearshift felt stiffer than usual and I had trouble finding neutral. Then, with the engine running, I couldn’t get it out of the first-second plane, and finally it seemed to be stuck in second. Nooooooo! We knew the ’box was worn – there had always been a characterful whine in the lower gears, and just occasionally it would jump out of second – but after forking out for a reconditioned engine the month before, this was not good at all.

Glumly we trailered the XI to the ExCel Centre for its pre-arranged starring role on the evo stand at the London motor show, and two weeks later we were back at Roger Swift’s to whip the engine out again (we’re getting quite good at this – just over two hours is our new record) followed by the ’box. Just out of curiosity we removed the plate over the shift mechanism. One of the shafts that are supposed to slide back and forward seemed to be jammed, but any further investigation, we decided, was a job for the experts. So the following week the box was dropped off at the Gearbox Centre in Northampton, who phoned a few days later to confirm our worst fears. Basically, all the bits that could wear out on a 1275 Midget box were worn out. A kit of parts would cost £120, it would take a day to rebuild, and the total cost would be £335.

Could have been worse, I suppose. In fact, had it seized just a day earlier, 400-odd miles from home with no trailer and no breakdown cover, it would have been a hell of a lot worse. Looks like the gods had been smiling on us after all...