Obvious combination: buy a £7m Sunseeker superyacht, plonk a Caterham on board 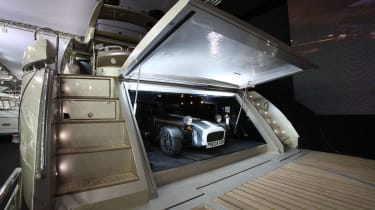 Not your usual motor show fare, this, but a tremendous bunch of pictures nonetheless: superyacht builder Sunseeker International has launched a new boat complete with its very own Caterham. Sort of. To push its Predator 108 Special Edition into the limelight, Sunseeker has plonked a Seven sports car in the on-board garage,  a space usually occupied by a small sports boat. So why a Caterham? The idea is to be able to transport yourself from sea to land in style, and the Seven’s ‘lightweight design and eye-watering performance could provide the Predator’s owner with as much fun on the roads as the sea’, they say. And a 20-odd grand Caterham is just a drop in the ocean compared to the £7.1million Predator, pun fully intended. The Predator itself is capable of 34 knots. That’s lots, apparently, and enough to make this one of the most extreme and performance-orientated crafts Sunseeker offers. Brimming with evoness, then. If you’ve a lottery win to spend then get yourself to the 2010 London boat show, open from today until January 17, as the Sunseeker/Caterham combination will be there to poke your way around. If you’ve not got a spare seven million or aren't too fussed on a room full of boats (and no water) then peruse the pictures to your right… Video of a Caterham in its natural environment – on track with evo Learn how to buy a Caterham R for not much with our buying guide Follow evo on Twitter and Facebook for the latest car news and views