Caterham reveals an all-new car to sell alongside Seven, the SP/300R, developed with Lola 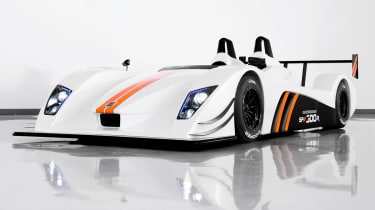 Meet the first all-new Caterham in almost two decades. Unlike the underachieving 21 though, the new SP/300R is no road-going sports car to rival the Lotus Elise – it’s an exceedingly potent track car to take on Radicals and Westfields. SP stands for Sports Prototype, signifying its body style, while the 300 denoting its power output in brake horsepower. The 300bhp is served up by a supercharged version of Ford’s 2-litre in-line four Duratec engine. It sits in the middle of the SP/300R, making this Caterham’s first mid-engined car. It has been developed with Lola, a fellow British sports car maker with great single-seater experience. The chassis is an aluminium tub while the bodywork is made of polyurethane. The suspension setup consists of double wishbones with pushrod-actuated dampers. The SP/300R has a target weight of 550kg. The engine is linked up to a paddle-shift operated sequential gearbox (with six speeds), and in combination with that low weight, 0-60mph is said to take just 2.5sec, while the top speed is 170mph. Standard kit includes full MSA regulation kit – an FIA-approved roll cage, six-point harness, fire extinguisher and cut-off switch – as well as a digital dashboard, AP Racing brakes and air jacks, making this good value in its market, according to Caterham bosses. It will cost £60,000 (before VAT), and just 25 will be built this year, all of them heading to motorsport for a UK-based one-make championship in 2012. There are no plans to produce a road-going version as yet, the car designed to be a powerful track special for Seven owners to aspire to (note its Seven-esque grille above the front splitter). It also hikes up Caterham’s profile elsewhere, especially in emerging markets with new motorsport circuits, where the Seven’s undeniable talents are less well known. The Caterham SP300/R has been unveiled at the 2011 Autosport show at Birmingham’s NEC. You can read more on the show’s star cars in the next issue of evo, on sale February 2.