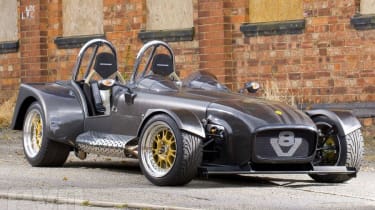 It’s not often that you can consider a GT2 a useful warm-up act. I’ve had the great pleasure of Stuttgart’s fastest for the last couple of days, so my brain is well and truly keyed in to the idea of anticipating at least half a mile down the road and my body is quite comfortable with the thump that comes as its turbos spool up. But I’m still not sure I’m ready for this.

The Caterham Levante basking in the sunshine at my feet weighs 520kg. It also has 550bhp. That’s 920kg less and 27bhp more than the GT2. There are lots of thoughts jostling for attention in the limited space inside my skull. There’s the worry that I’ve yet to go climbing in the Himalayas, learn to play jazz on the piano or read half the books I want to. Mostly, though, it’s a mixture of terrified excitement at what 1074bhp per ton is going to feel like and doubt as to whether it will even be within my capabilities to handle it.

Just eight of these incredible cars will be built by RS Performance with the full blessing of Caterham. The fast-beating heart of the car is a supercharged version of RS Performance founder Russell Savory’s 2.4-litre aluminium V8, which weighs just 90kg. The chassis is based on a Caterham SV (hence why it looks slightly, yet almost indefinably bigger than Caterhams usually do) and, although the spaceframe has been re-engineered by Arch, that means there’s still a de Dion rear end, albeit with Nitron 3 adjustable dampers all round.

In its matt-black and carbon finish it looks positively evil, like some large, exotic poisonous insect. A blind insect at that, because the lights are due to be fitted next week so for the moment the Levante is on a daylight MOT. Which means I’ve got to worry about hand signals too, although I do wonder if anyone’s actually going to be able to keep up enough to see my arm flapping around in the slipstream.

Stand on the Kevlar seat then slide your legs down towards the pedals you know are at the end of the dark tunnel. The hollow carbonfibre steering wheel now ahead of you is beautiful, while the squash ball-sized gearknob on top of its long stalk falls neatly into your left hand. The six-speed gearbox it operates is a Sadev sequential system – back to go up, forward to go down.

A row of silver circles, each about the diameter of a pound coin, lines the dashboard. Press the one farthest away for the battery, then the one second from the right for the ignition, then, after a brief pause for dramatic effect, hold down the one nearest to you to spin the dry-sumped V8 into life. Idling, the Levante sounds like a couple of big sports bikes, hinting at the distant origins of the engine. Touch the throttle, however, and the sound is much, much less docile. A firm pull back for first gear and then there’s a rather abrupt start as I inadvertently give it a few too many revs.

We’re off to the North Weald Airfield, about 15 minutes away, so that I can extend the Levante legally and with lots of room. I don’t think I have ever felt more foolish in a car. Every time I come to a junction it stalls. Nothing I do seems to keep it alive. I’m not making a great job of pulling away either, occasionally leaving more of the Avon CR500s on the road than is strictly decent.

I’m fairly sympathetic towards cars usually, and not a complete klutz when faced with three pedals and a steering wheel, so it’s baffling and embarrassing to say the least. Thankfully Russell explains all when we reach the airfield. Although it sounds like the engine’s going to die every time you come to a halt, if you leave it alone it won’t. However, blip the throttle at low revs and it will, so the more I tried to help the engine, the more I was in fact hindering it. As for getting it off the line, it just needs a gossamer-light touch on the hypersensitive right-hand pedal whilst easing the left hand one ever so gently up to its biting point. Russell says he usually push-starts people the first few times they drive it – the Levante does not suffer fools.

So it’s tricky at low speeds, then it reaches 4000rpm, at which point it will have finished clearing its throat and started accelerating faster than you can possibly imagine. You know the bit when a spaceship goes into warp speed and the stars turn from pinpoints to pinstripes? That’s what it feels like. Except that there’s also a screaming noise (the Rotrex supercharger) and a full-scale hurricane blowing out of otherwise clear-blue skies. If you’re in any of the first three gears then you will also probably be catching small slides as the rear tyres spin up; you’ll be catching them one-handed too, as you won’t have had a chance to take your other hand off the gearlever as you pummel your way up the fantastic ’box (a paddle shift is an option, and probably quite a sensible one). Because of the linearity of supercharging and because you can hold each gear to over 10,000rpm it isn’t just a momentary wallop gone in a flash either, it’s a sustained madness. I don’t remember breathing the first few times it all happened, and I know my eyes were struggling to process information fast enough. The airfield genuinely was a blur.

The suspension is a first-guess set-up at the moment and while it’s pretty much spot-on for the road, soaking up bumps nicely, on track it’s a touch soft and the car has a tendency to understeer too much in tighter turns. Of course, you can – and will – oversteer, and it’s nice and easy to catch and even hold because it has a Caterham’s beautiful balance.

The drive back on the narrow Hertfordshire lanes is much more satisfying now I’ve got used to the ways of the throttle, although it’s a car that never requires anything less than full concentration. Ideally you need to be on a road that is largely deserted, because even using half throttle you catch things up so quickly that you spend your entire time looking up exhaust pipes.

The Caterham Levante has the greatest power-to-weight ratio of any car that we have ever road-tested, and by the time I hand it back it hasn’t disappointed. Over £100,000 for 520kg of Caterham might sound a lot, but trust me, it isn’t. ‘Is it actually driveable?’ is the question most people have asked me. The answer is yes, but you certainly need to learn how to use it and you have to significantly recalibrate your mind and reactions. I doubt you’d feel happy straight away unless you’d spent plenty of time driving F1 cars. A GT2 simply won’t do.

The Levante will be back with us soon, next time with its traction and launch control systems working. That should make setting a lap time and getting some figures slightly easier. I only hope the timing gear can keep up…