We review the Chevrolet Camaro in soft top convertible form. As good as the muscle car coupe? 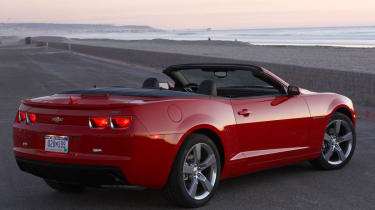 It's a ragtop version of the Chevrolet Camaro coupe that was launched in the US in early 2009. Like the coupe, it is based on Holden running gear and the dramatic styling draws inspiration from the 1969 Camaro. The power-operated cloth top takes about 18 seconds to stow but impinges on boot space. There are two Camaro convertible models: the V6-powered LT and the V8 SS. Both come in base (1LT/SS) and upmarket (2LT/2SS) versions. Technical highlights?

Chevrolet claims that the Camaro convertible is stiffer torsionally than a BMW 3-series convertible. To get the required structural rigidity, the engineers fitted a front suspension strut brace; reinforcements around the transmission; and Y-shaped underbody braces front and rear. The coupés were already, ahem, rather overweight, but the additional 109-kilogramme penalty turns the convertibles into real porkers: a V8 automatic weighs in at 1891 kg. The base convertibles come with a 312bhp version of GM's 3.6-liter DOHC, 24-valve V6 engine, mated to six-speed manual or automatic transmission. The 6.2-litre LS3 engine fitted in manual V8 models makes 426bhp but the more frugal L99 in automatic versions produces 400bhp.

Like an old American car, but with road manners. The car is remarkably shake free, rides well, and the V8 gets from 0 to 60mph in about five seconds. The V8 makes good power and sounds pleasing, although the V6 has a louder and more strident exhaust note. The steering is a bit lifeless and the V8 models tend to wash under hard cornering: the V6s feel better balanced, even if it's much harder to kick the tail out of shape in tight corners due to a relative lack of midrange grunt.

It’s bigger and more comfortable than a Ford Mustang convertible, but isn't quite as athletic. Against that, it has more rear seat space and rides much better. Compared with European cars like the BMW 3-series convertible, it offers a lot more performance and road presence for less money.  Anything else I should know?

In the States, a V8 automatic retails for about £26,000 and a base V6 sells for £18,405. GM says it may end up in Europe, but don't expect it to look such a bargain after shipping and the addition of Mr Osborne's pound of flesh.