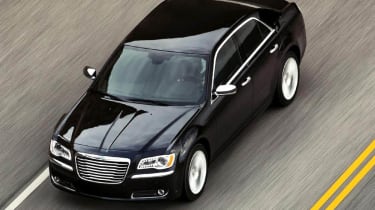 Chrysler has revealed the next-generation 300C. The American sports saloon made its official debut at the 2011 Detroit Auto Show with Chrysler CEO Olivier Francois curiously quoting Eminem lyrics at its launch. The Detroit launch comes after numerous leaks and spy shots of the new saloon. It is clear that the styling of the next generation Chrysler 300C is a case of evolution over revolution. The front end becomes more subtle and European thanks to a smaller grille and more sculpted headlights, while LED daytime running lamps also add a hint of Audi to the face.  At the rear there is more of the same - the boot lid now sports a built-in rear spoiler whilst the rear profile is generally more sloping than its predecessor. However, bulging front and rear wheel arches and a generally geometric side profile help to retain the outgoing 300C’s muscular appearance. Inside, the 300C boasts a smartened up dashboard, with an 8.4in touch screen infotainment system offered. Powering the next generation Chrysler 300C will be 288bhp 3.6-litre V6 and 358bhp 5.7-litre V8 Hemi petrol engines, the latter offering up a sub-6.0sec 0-60mph time. An eight-speed gearbox will be used to help push fuel economy above 30mpg. However, no diesel variant has been announced as yet, an inevitable barrier to big European sales. Whilst Chrysler has launched the 300C in the USA, priced from 27,995 US dollars (£18,000 approx), it is unlikely to hit UK shores until early 2012, where entry prices are unlikely to alter too much from their current £27K mark.