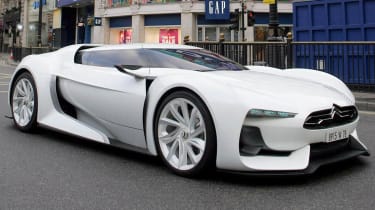 Citroen have released the final details for its Goodwood Festival of Speed appearance. The GTbyCitroen supercar, originally designed for a Gran Turismo game, will run the Goodwood Hill shortly after 9:00am on Friday 3rd July and a further five times over the weekend.

Sebastien Loeb will run the famous hill climb for the first time in his C4 WRC on Saturday morning and again in the afternoon. Loeb also plans to make a number of runs through the Forest Rally Stage and sign autographs on the Citroen stand.

Citroen will also be giving the C-Cactus concept its Goodwood debut in the ‘Tech Pavilion’. The diesel-hybrid is an ultra-green concept being evaluated for production.