Citroen's SM was an ambitious, innovative product, only restricted in sales by the fuel crisis and lack of right hand drive 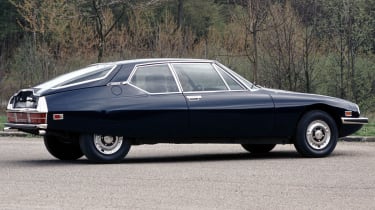 It’s hard to believe the Citroen SM is almost 40 years old. Low, wide and sleek, it still looks like a vision of the future, the consummate GT glamour car for that fantasy journey across Europe with your favourite mistress.

When the SM was launched at the Geneva motor show in 1970, Citroen hoped it could succeed where Jean Daninos, creator of the doomed Facel Vega, had failed, by building a commercially viable top-line French gran turismo car.  To this end the SM showcased Citroen’s clever oleopneumatic technology and combined it with Italian brawn: a Maserati V6 engine. With a top speed of 137mph, it became the world’s fastest front-wheel-drive production car, a title it held until the introduction of the Lancia Thema 8.32 in 1988.

In some ways the SM was nothing more than a kind of super-DS. By utilising established DS components as much as possible, principally the same oleopneumatically suspended pressed-steel chassis base unit but with deeper sills, Citroen was able to get the SM into production in just three years.

There had been rumours of such a project long before Citroen acquired Maserati in 1967, but what was needed was an engine with the power and refinement to lift the car above the standards set by the DS, which, for all its sophistication, still relied on a four-cylinder engine of utilitarian character and limited power.  Within days of the French takeover, Maserati’s legendary chief engineer Giulio Alfieri, working to Citroen’s brief, had created the basics of a new 90-degree, quad-camshaft V6, fashioned from a 4.2-litre Indy V8 but with a shorter crank throw and slightly reduced bore to get the capacity to an over-square 2670cc, nicely below the 2.8-litre limit beyond which French tax legislation imposed heavy penalties.

A V8 would have been physically too big when combined with Citroen’s traditional front-drive layout with the gearbox ahead of the engine in the nose of the car.  As it was, even with the V6 behind the wheel-line the SM had a vast front end. Six headlamps – two of which turned with the steering – behind a glass cover helped form a distinctive face, on European versions at least. Safety legislation in the US meant that Americans got four fixed lights and no glass cover.

Alfieri had offered three power curves, from the minimum 150bhp Citroen had specified through to 200bhp, but it was felt 170bhp at 5500rpm was sufficient, with three double-barrel down-draught Weber carburettors. Mated to a five-speed transaxle of Citroen design and manufacture (that Lotus would use in the Esprit right up until 1987) this power pack was tested in special two-door DS coupe test mules.

Designer Robert Opron’s fastback styling for the SM was not a packaging triumph perhaps – the boot was small, the rear seating useable but cramped – yet it was graceful and ethereal, suggesting the sophistication within. The swoopy and sumptuously modernist cabin furniture set equally high standards.

Refined and slippery (the claimed drag coefficient was Cd 0.25), the SM was also a car of great ability. Modern drivers wouldn’t find it quick – its acceleration was healthy rather than alarming even in 1970 – but the sound was exciting and the gearchange wonderfully positive. Keen drivers would also come to appreciate the sharp all-disc brakes (operated by a pressure-sensitive floor-mounted ‘button’), the ultra-high-geared powered steering and the restful high-speed stability. As a driving experience there was nothing quite like it.

The V6, which was built in a specially designated part of the Maserati factory, would go on to appear in the Maserati Merak and the mid-engined Ligier JS2 sports car. In fact, it would be Ligier who would build the last 270 SMs from late 1974 to May 1975, but by then accountants at Peugeot, Citroen’s new owner, had discovered that the SM was losing money and the need to divest itself of the car was so urgent that the last few hundred SM bodyshells were crushed.

Just shy of 13,000 SMs were built in all – a figure that might have been higher were it not for the early-’70s fuel crisis making thirsty and hedonistic 2+2 coupes socially unacceptable. A lack of right-hand drive restricted the market in Britain to just 327 owners. Sadly, Citroen has not made anything quite so glamorous and ambitious since, and nor has any other manufacturer. When it comes to combining beauty with innovation, the SM remains unsurpassed.