The day Kris Meeke scared us in a Citroen Dispatch van

Kris Meeke is a fast man. Turns out that applies to standard production vans as well as World Rally Cars... 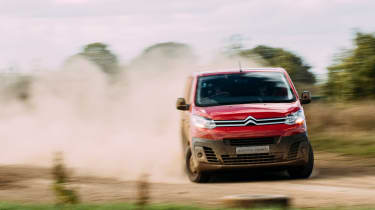 Oh the things you’re asked to do in exchange for driving a factory World Rally Car for a living! The last time I met Kris Meeke at the Silverstone Rally school we were in his IRC-winning Super 2000 rally car. This time we are in a Citroen Dispatch van. Yes, a van.

As I climb up onto the bench seat, Kris twists the key in the ignition barrel. Usually that would signal a squeak of intercom, but in this instance it’s just the radio in the dash (with a 7-inch touch screen) that turns on, playing some Motown selected by the local radio DJ. I do up my three-point seatbelt, Kris drops the clutch and we head off down the muddy track in a flurry of wheelspin.

I’m not going to pretend that a standard Dispatch is quick, but I guarantee you would still be alarmed at the speed Kris enters the first right-hander. And every subsequent corner, for that matter. With a judicious yank on the handbrake Meeke sets the tail of the empty van in motion and holds some ridiculous angles, winding on lock with rather more than a flick of the wrists. He even manages to get the Dispatch (a van inspired by the world of passenger cars and SUVs…) transitioning one way and then the other. It is hilarious and both of us are laughing as he decides to see just how fast he can lob the modular platform van into the long corner at the end of the straight. I seem to remember him asking me (just as we sailed past a reasonable braking point) if I’d ever been in a van that’s rolled, but that might just have been my over-active imagination. 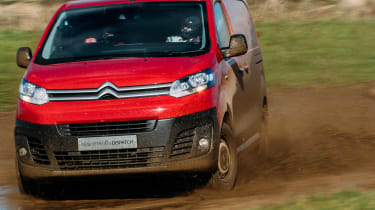 We do a couple more laps, Meeke tells me about his new Specialized Enduro and then he parks it up (with the handbrake, obviously) in a flurry of dirt. Amazingly it really was a standard van (available from £22,508) so watch out for it appearing on the used market…!

Both Kris and Paul Nagle seem very relaxed and Meeke attributes his impressive speed this year to precisely this state of mind. With a long-term contract in place with Citroen and a new 2017 car being built around him he no longer feels the pressure to prove himself at every event. The result has been overall wins in both Portugal and Finland this year. He has also set some staggering individual stage times, most recently on Corsica where he beat the rest of the field by a cool 36 seconds on one stage. That doesn’t usually happen in modern WRC.

I ask Nagle if from the passenger seat he can feel the extra speed of the 2017 cars (which have more aero, more power, wider tracks and a centre diff) and his wide-eyed expression says everything I need to know. Kris is clearly excited about the new car too and although there is still work to do you sense that Monte Carlo can’t come soon enough. Perhaps he’ll use a Dispatch as the recce car…