Having won the WRC, can Citroen now win over the hot hatch market with its daring three-door? 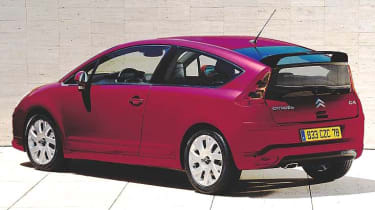 Two excellent things have happened in Citroen-land. One, the French car-maker, for which motorsport was anathema not so long ago, has won the World Rally Championship. Two, it has launched the C4, the better to take on Ford's new Focus and Vauxhall's new Astra. No, let's make that three. Such is the intrigue of the C4 that Citroenn may, at last, be able to see a life beyond cashbacks and insane deals. That WRC win fixes the brand in people's minds, but not the car - a Xsara - because it's a mite forgettable. There'll be a WRC C4, of course, but how will this translate to a road version? Notions of a Citroen reply to the Focus RS may be either premature or futile, but the VTS version of the C4 does promise some credibility. It's the range-topping version of the three-door C4 'coupe' and features the 177bhp engine already seen in Peugeot's 206 GTI 180. Before delving into the VTS-ness, though, we should find out just what the C4 actually is. Beneath its highly distinctive clothes a C4 is much like a Peugeot 307 and shares that car's platform. The clothes maketh the car, though, along with some C4-specific chassis tuning. The front ends of both three- and five-door C4s are the same, as are the roof panels, despite appearances. At the back, though, we see two different treatments that grew out of the two separate designs developed during the C4's gestation. The five-door is rounded like a C3 supermini, but the chop-back three-door is much cooler. There are elements of Alfasud Sprint and original Honda CRX in there, mixed in with the Citroen C-Airlounge concept car in the way the near-horizontal upper tailgate glass cuts into the roof. Inside, the C4 has Citroen's most radical design in years. The centre boss of the steering wheel stays still, and the steering wheel transmits its movements to the column by an inner toothed ring and couple of gears. It means the boss can house a bevy of controls; those for the stereo, the computer and display screen, voice activation if fitted, heater air recirculation and the cruise control and, ahem, speed limiter device. It also means that the main facia is clean and simple, with an LCD display on top for most instruments apart from the tacho, which sits in a pod on the steering column. Its scale glows red as the rev-limit approaches. That facia-top pod has an open back, so ambient light can illuminate the screen and it remains readable even in sunlight. The smell of innovation even extends to the facia vents, because you can insert a perfume cartridge into one of them and be calmed by themes of vitality, sensibility or well-being. The C4 also optionally features two pieces of interventionist technology introduced on the revised C5. I mentioned the dreaded words 'speed limiter' earlier on, and it's a feature driven by the French police's increasingly draconian approach to limit-infraction. It makes use of the drive-by-wire throttle to limit yourself to a pre-set speed, which you can exceed only by pressing hard against a kind of 'kickdown' resistance in the pedal. Not a bad idea, but we really don't want this ever to be talking to a sat-nav system programmed with every road's limit. The technology exists - be on your guard. The other feature is a device to vibrate the right or left side of your seat cushion to wake you up if you've nodded off. Tech aside, how's the car? Solidly and neatly made, with many more soft-feel surfaces than a Focus, and seemingly roomier than rivals. The VTS's engine needs to be stoked up towards its heady rev-limit to get the best from it, just as it does in the Peugeot; there's continuously-variable inlet-valve timing here, but a distinct power-surge at 4000rpm. It makes an obvious whoosh from its exhaust, too. A C4 rides with greater suppleness than a sometimes-fidgety 307, and this even applies to the tauter VTS. It's one of those cars with lots of longitudinal compliance but enough lateral stiffness to react keenly. The steering isn't as instantly responsive as a Focus's, but once past an initial softness there's pleasure to be had. Some passive rear-steer helps it to point into a bend without the fearsome lift-off oversteer of the Xsara VTS. It may not be the greatest driver's car in the class, but the C4 VTS has enough else going for it to make a fine companion. Can't wait for a WRC replica version.