Is the Citroën C4 VTS a proper hot hatchback? Tricky one. The genes are surely there, with souped-up Saxos seen on every Saturday-night high street and Xsaras still to the fore in the WRC, but the Xsara VTS road car never really took off and the new C4 seems more a statement of technology and design than of raw driving pleasure. 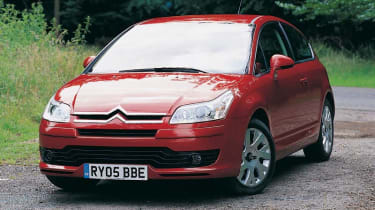 Is the Citroën C4 VTS a proper hot hatchback? Tricky one. The genes are surely there, with souped-up Saxos seen on every Saturday-night high street and Xsaras still to the fore in the WRC, but the Xsara VTS road car never really took off and the new C4 seems more a statement of technology and design than of raw driving pleasure.

But a stationary switch-pod in the centre of the steering wheel and a central digital LCD dash-top display don't have to rule out an amusing car-driver interface, even if they don't seem natural for a rapid hatch. Maybe it's the threat of driver-controlling electronics and plug'n'play nanny-statism that's giving me cause for concern. Could I connect with the slightly outlandish C4 in a way I would have connected with something more, shall we say, normal?

When I first drove C4s in their various forms it seemed that beneath all the techno-cleverness and visual drama was a car made of the right stuff, a car that shared underpinnings with Peugeot's unexciting 307 but which seemed both to ride more fluidly and handle more engagingly. And I did love the radical cabin and the way the looks made it impossible to mistake the C4 for anything else. Here was Citroën back on form, adventurous and proud to be different from the herd.

And now evo has a C4 VTS to test for a year, the 180bhp petrol version of course. Being a VTS, it's a three-door, whose domed roof (surprisingly high in the middle, as I discovered when washing it) is glazed at its rear end then chopped off into a separate vertical window. This has its own tiny wiper and extends down far enough to make reverse-parking unusually easy in today's world of thick-pillared, high-tailed cars.

The front grille's chevron badge and extended side whiskers make a distinctive face, a motif repeated in the centres of the wheels. Huge headlamp lenses cover ornate reflectors and xenon headlights able to point round corners as the the front wheels steer, just as those of Citroën's DS were able to do back in the 1960s. The doors are enormous and heavy, which is what happens when a design is so cab-forward and you still want to let people into the back, and the cabin is roomier than it looks even if most of the storage spaces are less useful than they look.

Our C4 came with optional lane-departure warning, which vibrates the driver's seat if you move lanes without signalling. The idea is to alert you to sleepiness-induced wandering, but it's deeply irritating and an example of the feared techno-overkill. I've switched it off. Now that I'm the boss, I can discover how much of a driving machine the VTS is, and so far I'm pleasantly surprised. The gearchange was clunky and awkward at first, but suddenly it clicked and fluid progress ensued.

Except for the brakes. They are drastically over-servoed and horribly unprogressive, which is unforgivable in a driver-flavoured car. I think I'll investigate some harder pads.